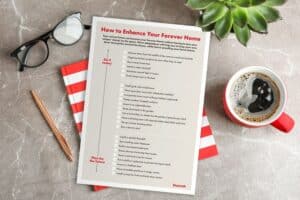 Stairlift and homelift supplier Stannah has released new guidance highlighting some of the important adaptations that can be made to future-proof homes following new research that reveals a large number of Brits do not believe their current home is accessible.

In March 2022, a survey was sent to over 1,000 Brits aged 55 and above to learn about their views towards downsizing and the future of living in their own home.

It revealed that almost three in five fear they will not be able to live in their current home at 80 years old, and, of those in the UK that have downsized, more than half regret it and look longingly on what they have lost.

The research points towards the rise of the ‘forever homeowner’; more than two in five over-55s plan to stay in their current homes, though the research also revealed the activities those aged over 55 fear they will be unable to do in the next 20 years, such as getting up and down the stairs or getting in and out of the bath.

Additionally, nearly a third admit they have not planned for their future housing needs. Worryingly, almost half of Brits aged 55-64 do not consider their current home accessible.

Despite recognising the importance of home adaptations in supporting their mobility needs, almost a third worry that doing so risks lowering the value of their property. Two-fifths have are also unaware of how much home adaptations cost. While over-55s claim they do not know how much it would cost to make their home accessible, one in five feel they cannot afford to future-proof their home.

In response to these figures, Stannah’s inclusive design champion Vaila Morrison RIBA is empowering homeowners to invest wisely in their future with her guide to future-proofing a ‘forever home’. The guide shows adaptations that can be made in the home to future-proof for later life – all while increasing the value of the home.

Vaila commented: “Memories associated with home is a powerful force and, as well as not relishing the upheaval of moving, there is an understandably strong desire for people to remain in their current location and within their community. This ‘forever home’ view drives home to me that we need to be thinking about our forever (future) selves.

“Any home improvements we do, we should be thinking about how what we do could make our house work better for our future selves. Oftentimes people end up in a position of making do or have to start thinking about intrusive adaptations at critical point in life, sometimes resulting in barriers coming home after an illness or injury.

“The earlier we think about inclusive design, the better, which can only be a good thing for helping make our homes more welcoming for older or disabled friends and family too!”

The research further revealed that three in five older Brits say they have no plans to downsize, however, half feel like their current home is too big, and the prospect of less maintenance that a smaller home brings are making them think twice.

The most distressing figure of the research, according to Stannah, is that more than half believe they will not be able to live comfortably in their current home by the time they turn 80.

To accompany the firm’s latest future-proofing home guidance, Stannah’s new Forever Home Checklist spotlights the range of adaptations that can be implemented in the home to improve accessibility.

Founded in 1867, Stannah has grown to have a turnover in excess of £260 million, now employing over 2000 people and providing stairlifts, commercial passenger lifts, service lifts and goods lifts to a global customer base.

Stannah Group announced recently it is opening a new custom curved rail factory in the US as it looks to reduce lead times, meet growing demands, and adjust to global supply chain disruptions.

https://thiis.co.uk/stannah-launches-new-guidance-highlighting-accessible-adaptations-to-future-proof-homes/https://thiis.co.uk/wp-content/uploads/2022/05/How-to-future-proof-your-forever-home-Stannah-2-900x600-May-22.jpghttps://thiis.co.uk/wp-content/uploads/2022/05/How-to-future-proof-your-forever-home-Stannah-2-900x600-May-22-150x150.jpg2022-05-20T12:50:10+01:00Millie YorkNewsroomSupplier NewsTrade Newsaccessible housing,downsizing,inclusive design,Over-55s,StannahStairlift and homelift supplier Stannah has released new guidance highlighting some of the important adaptations that can be made to future-proof homes following new research that reveals a large number of Brits do not believe their current home is accessible. In March 2022, a survey was sent to over 1,000...Millie YorkMillie Yorkmillie.york@bhta.comAdministratorTHIIS Magazine