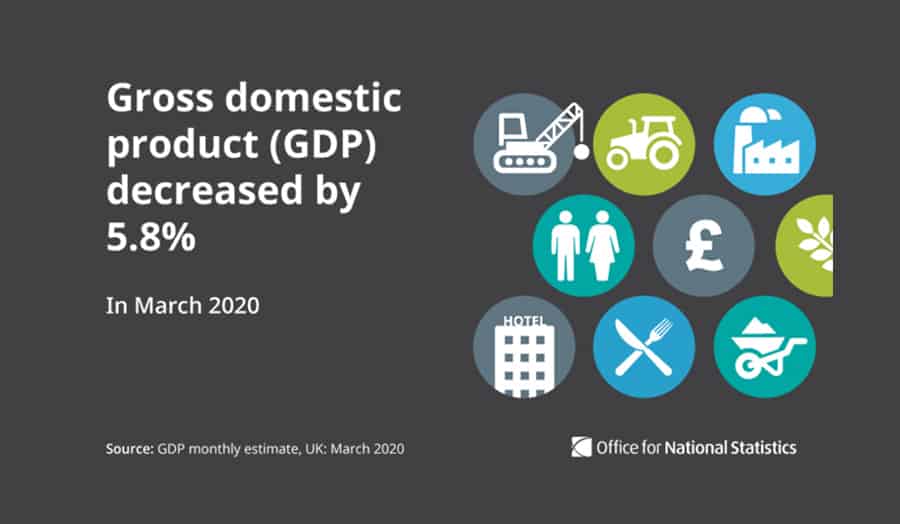 In the first quarter of 2020 (January to March), the UK saw GDP fall by 2 per cent and by a staggering 5.8 per cent in March – the largest monthly decline ever recorded by the Office for National Statistics (ONS).

The results highlight the impact that coronavirus has had on the UK economy across multiple sectors, first seen with supply problems arising from China’s COVID-19 outbreak in January and eventually leading to the UK’s lockdown in March.

Unlike the financial crash of a decade ago, the government in the UK has introduced comprehensive interventions, including yesterday’s extension of the furlough scheme, in an attempt to prevent widespread business closures and unemployment in the hope of a quicker recovery.

According to the latest figures released today by the ONS, the services sector – which includes retailers – fell by a record 1.9 per cent in Q1, as well as declines in the manufacturing and construction sector.

“The quarterly fall reflects declines in the vast majority of industries, most notably education, wholesale and retail trade and repair of motor vehicles and motorcycles, food and beverage, accommodation and travel agencies,” stated the ONS.

“Despite falls throughout the services sector, a small number of sub-industries such as computer programming showed growth.”

Household consumption also declined by 1.7 per cent from January to March, again, the largest shrinkage since the financial crash.

“Some types of household consumption are likely to be particularly affected while social distancing is in place, especially those types of spending that are more reliant on physical interaction or those that relate to travel.”

Yesterday, Health and Social Care Secretary Matt Hancock suggested that travel abroad for holidays will not take place for people this year, potentially restricting demand for lightweight mobility products specifically designed for users to take on planes and cruise ships.

The figures released by the ONS also only account for one week of full lockdown in the UK, which was introduced by the government on the 23rd March 2020.

It is expected that figures for the current quarter (Q2) will be significantly lower.

The findings from the ONS come as England begins to move to an easement of lockdown measures, including the imminent reopening of retail shops set to come in June.

Importantly, the ONS highlighted that its estimates for Q1 will be less certain than its usual predictions, citing challenges collecting data under the current lockdown restrictions.