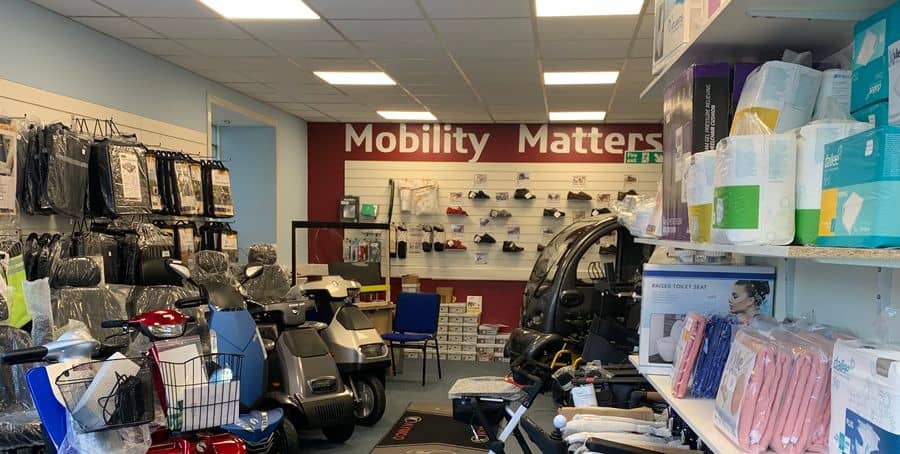 As it continues its growing expansion plans in Scotland, Mobility Matters opened its sixth store in Glasgow last month.

Owner Robert Frew says that the new store, as with his others, will aim to give customers a personalised service and help with choosing the most appropriate equipment for them.

So why Glasgow? Robert explains: “We have a lot of customers that travel from Glasgow to Ayrshire so we could see early on that there would be a demand.

“We are the only company in the area that do trade-ins or part exchange, and we also offer a lot of products that other stores don’t physically offer, from brands such as Motion Healthcare and Rehasense.”

Searching for the right premises 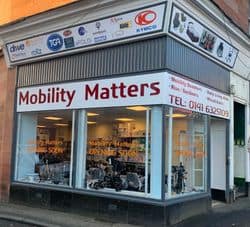 It had always been on Robert’s mind to find a base in Glasgow, he says, and he was simply waiting for the right store to become vacant. When the right store did come on the market last year, Robert says that they had to make a quick decision about whether to purchase it.

Robert says: “I had to make a decision on 15 December 2021 to take it! It helped that the planning consent was already in place to turn it into a retail unit.

Since then I’ve turned it round quickly, working non stop to get it to where it is now.”

Thrilled with the final result, Robert also couldn’t be happier with the location. It happens to be close to the Queen Elizabeth University Hospital, one of the largest acute hospitals in the UK.

There is a large demographic of elderly people living in the area, which is also quite prosperous, with a new development of around 400 flats facing the store. It is highly visible too.

“The shop is right by a crossroads that plenty of traffic needs to go through to go anywhere,” adds Robert.

The store stocks a broad range of equipment including scooters, wheelchairs and daily living aids.

“We have got a good selection of brands too,” says Robert. “The store has TGA scooters, Scooterpac cabin cars, Electric Mobility powerchairs, KWK autofold powerchairs, Z-Tec mobility scooters, Sandpiper Shoes footwear and Able2 accessories. We’ve got a small selection of rise and recliners at the back of the store as well.”

The shop manager is Stuart O’Neil, who is also Robert’s stepson. Robert explains that Stuart came to the business six years ago, during which time has been fully trained, previously working in the Mobility Matters store in Irvine. He moved to the Glasgow store because of the expected increase in footfall. 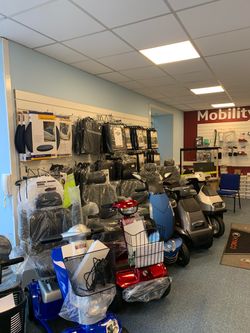 Mobility Matters was established in 2016 and is Ayrshire’s largest independent stockist of scooters, furniture and daily living aids, explains Robert.

Prior to setting up Mobility Matters Robert had been working as a sales manager and engineer of specialist wheelchairs as well as working for Access to Work, a Scottish scheme helping people with a disability to start or remain in employment.

Robert continues: “I started up doing mobility equipment from home and I’ve carried on since then.”

When he first started, Robert said, it was quite difficult to get himself known but after obtaining an account with Kymco, who he credits with taking the risk, the business has just grown and grown.

The first store was opened in the town of Stewarton, near Kilmarnock.

“A year later we were approached by South Ayrshire Council because someone had walked away from a mobility shop in Ayr and left a lot of bad feeling customers so we took that store on.”

In the last couple of years alone, Robert opened a Mobility Matters store in Kilmarnock on Portland Street, a store in Irvine and a specialist shop in Kilmarnock focused solely on reclining chairs and adjustable beds, called Robert’s Recliners.

Robert adds: “Electric Mobility came onboard with us last year and we’ve been moving mobility scooters from this brand too.”

Cabin scooters from Scooterpac have also been doing well. Not a cheap mobility item by any means but one which perhaps does unsurprisingly well in Scotland, given its expanse of varied rural terrain.

Says Robert: “I’ve sold cabin scooters as far as Inverness, and the new Invader speaks for itself.”

At the same time Robert says that he wants to try and keep within a radius of where he sells to so that can continue to offer that all important customer service.
“If I’m having a problem with one of the scooters I have sold so far away it suddenly becomes a loss leader by the time you go it a few times,” explains Robert.

This is why Robert prefers to focus his advertising on the areas surrounding his stores. He frequently advertises on Ayrshire radio station, West FM, as well as in the Scottish tabloid Daily Record, and the Daily Mail national newspaper.

The COVID-19 pandemic has had a big impact on the shop and forced Robert to re-think his business and change how it deals with customers.

His wife’s occupation as a carer and support worker has also brought home to him the need to be careful around vulnerable people, he says, particularly with regards social distancing and taking COVID tests.

“Footfall to the shop have dropped,” he says. “When a customer phones in we now say to them that rather than they come to us we will come to them.

“We’ll put a couple of scooters in the vehicle and take them round to show them and let them try it while ensuring that we socially distance and so on.”

At the end of the day, it is an ageing population and customers need the products, he explains.

“I think we’re going to have to live with COVID for a while but at the same time listen to the advice that has been given.”

The pandemic also helped influence a decision for the store to launch an e-commerce website this year so people can buy products online, but at the same time still offering them that customer service.

Robert adds: “E-commerce is a ‘dog eat dog’ sort of thing. For many companies it’s often about beating the competition with low prices. My focus will be on ensuring that when a customer buys something from us we will be able to service it for them.”

E-commerce sites set up manufacturers make business particularly difficult, he says. “When you get suppliers selling to us who have their own ecommerce websites it means that they are also selling against us, so it hard for us to compete. For them it is about selling more units, but by the time I’m buying that product I’m making a smaller margin to cover it.”

That being said the Mobility Matters has around 200 scooters and 40-50 electric wheelchairs in stock, both new and used, so it has plenty of products to offer customers across a variety of price points.

Robert hints that his store expansion plans will continue apace even though he jokes that his wife would like him to leave it at that. Says Robert: “We are on the south side of Glasgow. There’s nothing wrong with the east side! We’ll see how it goes.

“Sales managers and company directors have talked to him me about areas that would be good and areas where they currently don’t have accounts. The thing is, it’s early days. We have grown from a small company where there was £200,000 turnover when we first started to the £1million turnover that we have now.”

Despite this success, Robert admits that a lot has changed over the years in the mobility sector.

“The cost of products has gone up considerably over the last couple of years because of transportation, COVID and so on, says Robert.

“A folding scooter used to be £2,000 but now it is more like £2,400. It is difficult sometimes trying to explain to customers that the costs the manufacturers are absorbing, with all these extra handling charges, and then passing on to us, is quite a bit.”

At the end of the day though, despite rising costs, Robert hopes that the strong work ethic that he and the team has at Mobility Matters will keep the customers coming,

My father, a retailer, got me into this when I came back to Scotland from the States, where I had been living, years ago. He always said that the best advice he can give is this: put people before profit and you’ll always have people coming to you.” 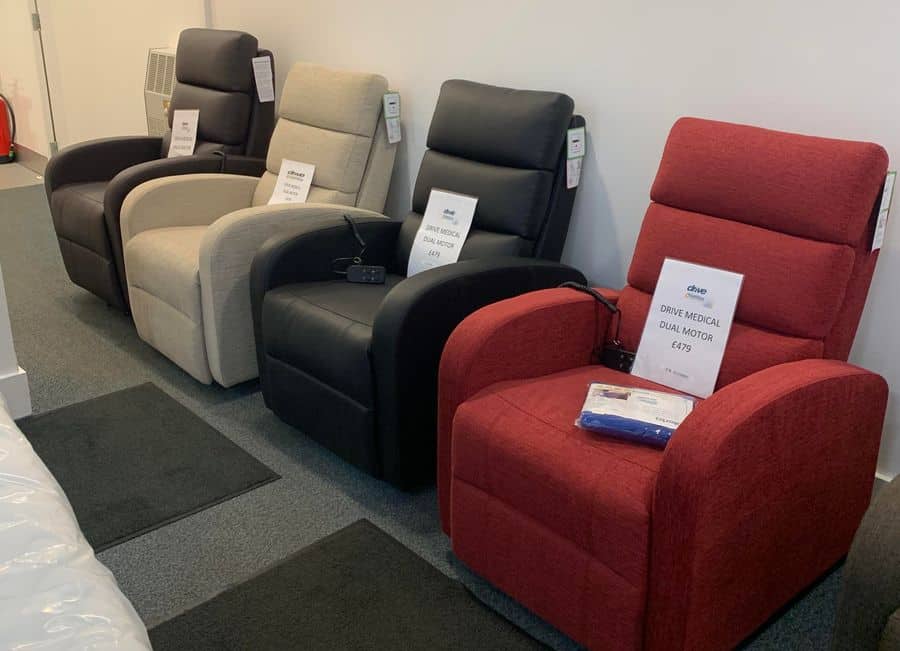