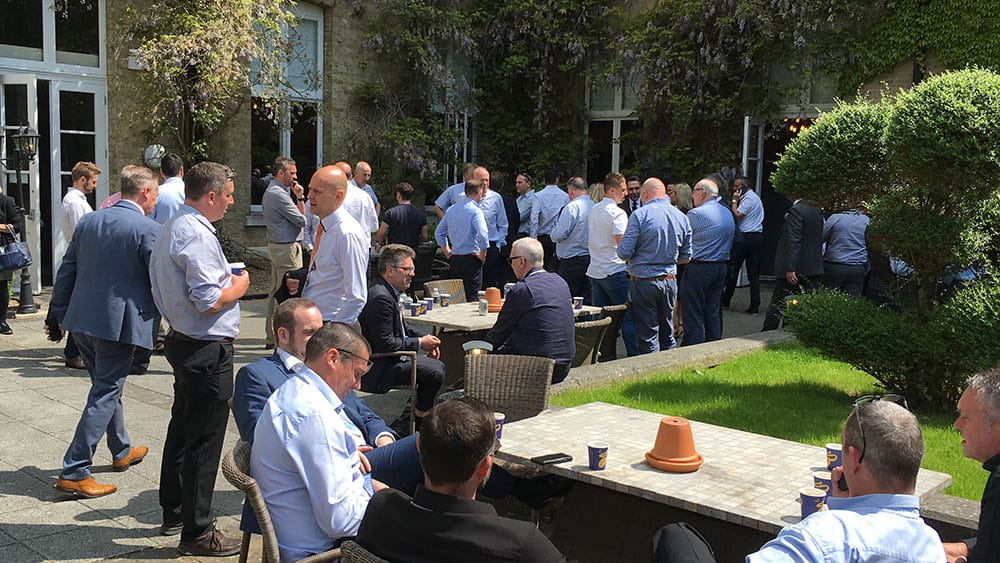 When people talk about corporate culture, it can seem like a rather lofty academic idea discussed in business classes, textbooks and lecture halls. Listening to the impassioned speeches and seeing the genuine enthusiasm demonstrated at Handicare’s Dealer Day in May however, it was clear to all in attendance that corporate culture is certainly not just an abstract concept. Covering this year’s annual event, THIIS discovered how Handicare is aiming to reach new heights with its dealers through an enhanced incentive program, new product innovations and sharing best practice.

It is rare for a supplier in any industry to invite all of their top dealers to speak frankly and honestly with them, addressing points of contention head-on. It is rarer still to do this whilst inviting the trade press into the midst to report on the occasion! Never afraid to address the elephant in the room however, Handicare discussed the year’s highs and lows with its key partners at the prestigious De Vere Beaumont Estate in Windsor.

Now a staple in the diary for those who supply or install Handicare stairlifts in the UK and Ireland, the annual dealer day has proven itself to be one of the must-attend events in the trade calendar, providing informative, educational and entertaining content to satisfy all attendees.

“The elephant is well and truly out of the room. We have had a fantastic year and this is thanks to all of you.” Clare Brophy

Whilst 2018’s event firmly set out to address the dealer concerns relating to Handicare’s direct-selling operation Companion, 2019 struck a markedly positive tone, highlighting Handicare’s success across the board and the significant part dealers had played in helping achieve it.

At this year’s event, product innovation and dealer relationships dominated the conversation, with the stairlift manufacturer confirming that it had managed to secure significant market share over 2018 following its commitment to the “one-family” concept.

Recently made responsible for all Handicare stairlift operations in Europe and Asia Pacific, Clare Brophy told dealers: “The elephant is well and truly out of the room. We have had a fantastic year and this is thanks to all of you.”

Working towards the goal of being the worldwide market leader, the company says it has focused on breaking down silos that existed to create one whole organisation, implementing smarter communications between customers, as well as more effective price promotions and deals for trade customers at the right time.

According to Handicare, the result of its renewed and targeted commercial strategy was a nine percent sales growth in the UK, rising to a turnover of £62million, whilst the Group’s total accessibility sales generated £189million, of which £148million was stairlifts.

Delighted with the stairlift growth in the UK, a market considered mature, an enthused Clare exclaimed: “We are taking more of this market. We are taking that market share away from our competitors and that makes me very proud.” 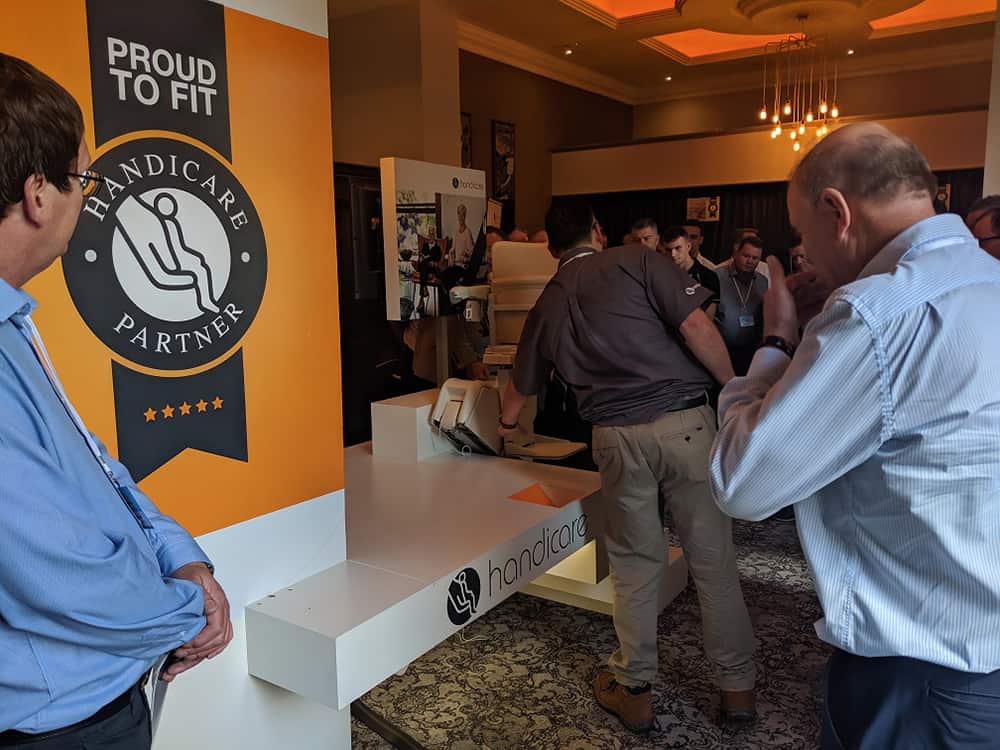 Attributing the significant growth across its dealer network to its ‘one family, stronger together’ concept that Handicare launched in 2018, Clare added: “The results that we have had haven’t just happened because we have all just sold more. They have happened because we are all, collectively, making this market ours.”

Elaborating more on the Handicare’s dealer performance, Paul Stockdill, National Sales Manager of Handicare UK, explained: “We did £62million as an organisation in the UK last year which is fantastic growth and 26 percent of that came from trade sales.”

Helping to support the trade sales, Paul mentioned that the company is investing more into building its brand online amongst end-users, expanding its social media presence, as well as creating a brand-new collection of point-of-sale materials.

With the addition of customer service expert Patrick Dignan to the Handicare fold, Paul also noted that the company is working to improve its customer journey following feedback from dealers.

As a result of the climbing dealer sales, Handicare has launched a new level to its successful partner programme, making the start of its sixth year.

Originally launched in 2014 and consisting of 66 ‘select partners’ and eight ‘elite partners’, Handicare revealed that its new ‘prestige’ level was the result of its ‘elite’ level no longer feeling ‘elite,’ due to the number of dealers that had reached the upper criteria.

“One thing that has really surprised me in the two and half years I have been here is the absolute desire for you guys to move up to that next tier and become an elite partner,” explained Paul.

By 2019, ‘elite’ dealers had skyrocketed to 26 whilst select dealers only declined to 55, accentuating that the the number and quality of dealers the stairlift supplier works with had increased over the loyalty scheme’s five years.

“I was a bit sceptical of this partner programme when I first joined,” commented Paul.

“I think reflecting on what we have achieved in five years, it is phenomenal. I was wrong – we were right to put this programme in place and now it is about taking it to the next level and reaching for new heights.”

In addition, the company announced its new incentive scheme, the ‘Everest Challenge’, with dealers in with a chance to win impressive prizes for reaching specific sales figures relating to the Handicare’s new 1100 stairlift.

“Although we do not get it right every single time, I am happy to stand here today and say, we did, in 2018, become stronger together,” declared Paul, “and long may it continue.” 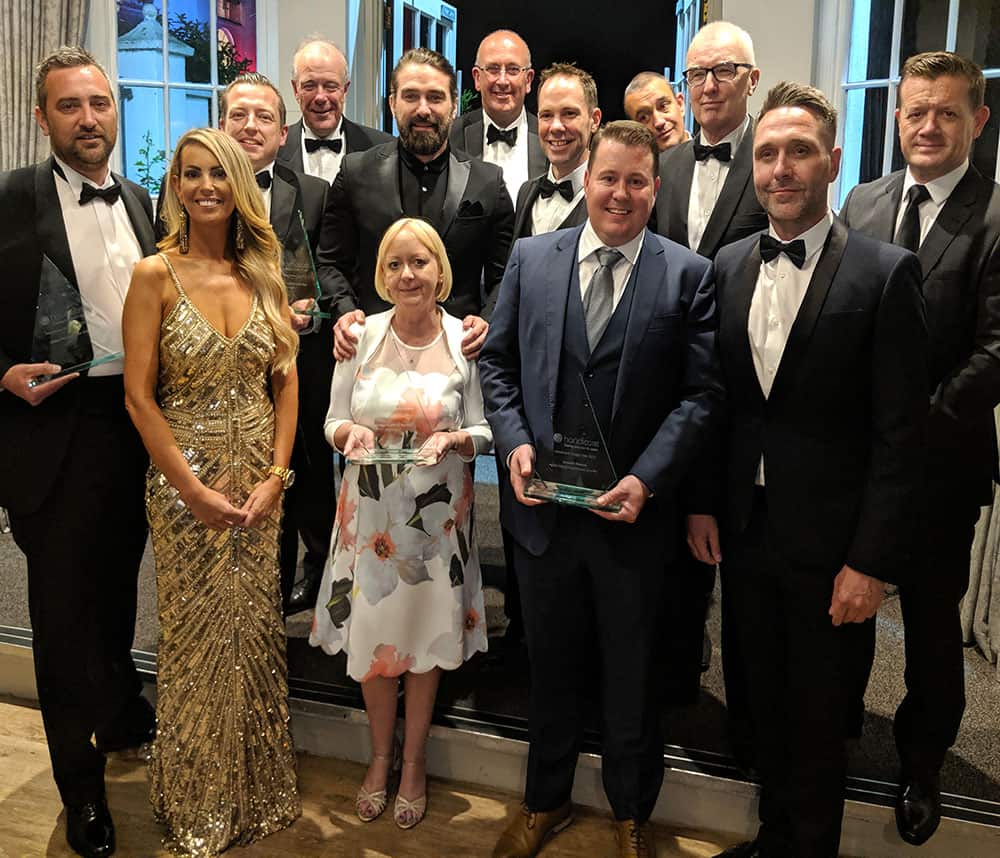 Touching on building stronger partner relationships and striving to perfect product quality as two key goals for Handicare in the future, Staffan Ternström, Handicare’s CEO and president who joined the business in August 2018, stressed the company’s renewed commitment to product development.

“Yes, we have a growing portfolio but we are not happy with that,” the Swedish CEO said.

“We think we need to refresh that portfolio, work smarter and be better with component handling whilst also build in innovation that could benefit you and the way you deal with our products and then, ultimately, our end-customers.”

In particular, she emphasised the company’s wider product range, including moving and handling equipment, through-floor-lifts and bathing, stating: “We want to have portfolio where you don’t need to go to anywhere else, you just want to work with Handicare because you get the best product, the best service and the best price.”

On the day, Handicare had a raft of new products to showcase to dealers, including its new 1100 stairlift with power options and the latest iteration of its photo survey tool Photo Survey 4D.

Commenting on the new 1100 stairlift, Paul said: “I am really excited about this product and I believe the new features are going to allow our businesses to reach new heights.” 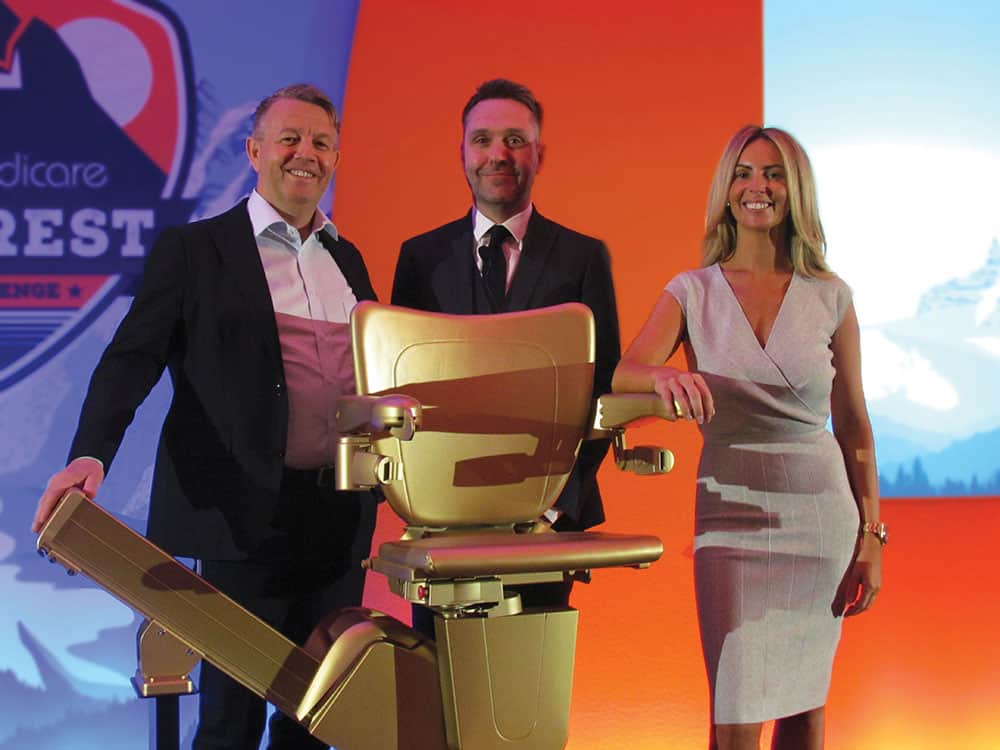 Demonstrating the level of respect the stairlift supplier has for its dealers and the trust it has in the strength of its partner relationships, Handicare was also forthcoming with identifying key areas where development was needed inside the organisation and what it was doing to improve.

“We did £62million as an organisation in the UK last year which is fantastic growth and 26 percent of that came from trade sales.” Paul Stockdill

Empathising with dealers’ demands for products that are reliable, good value and delivered when they say they’ll be delivered, Handicare’s Group Executive Vice President of Operations Peter Slack addressed quality issues that had affected dealers and detailed what had been done to fix it.

Additionally, despite impressive growth across the board, Clare candidly told dealers: “I will never stand up here in front of you with rose-tinted glasses and think we are perfect, because we are not.

Undeniably, it takes courage to stand up in front of a room full of customers to admit to failings, however, it is that very willingness to keenly tackle and resolve the concerns of its dealers that Clare says sits at the heart of Handicare’s culture.

“I think if there is one thing that does absolutely put us ahead of our competition, it is our customer service,” she asserted.

“We are absolutely obsessed with trying to get it right.”

In a world where getting a straight answer can seem an impossible task, it was Handicare’s honesty that a number of dealers on the day commented they appreciated, acting as an example for other suppliers working to establish long-term trade partnerships.

In the evening, Handicare celebrated and rewarded its highest performing dealers at a black-tie dinner, hosted by special guest speaker Ant Middleton – best known as the Chief Instructor from Channel 4’s SAS: Who Dares Wins – marking the start of the company’s ‘Everest Challenge’.

Praising dealers growing stairlift sales profitably, winners were announced over a memorable three-course meal which saw three tenors compete in a sing-off to the surprise and delight of attendees, helping the evening hit a particularly high note.

Prestige Dealer of the Year: Ableworld

Handicare’s Dealer of the Year: Pollock 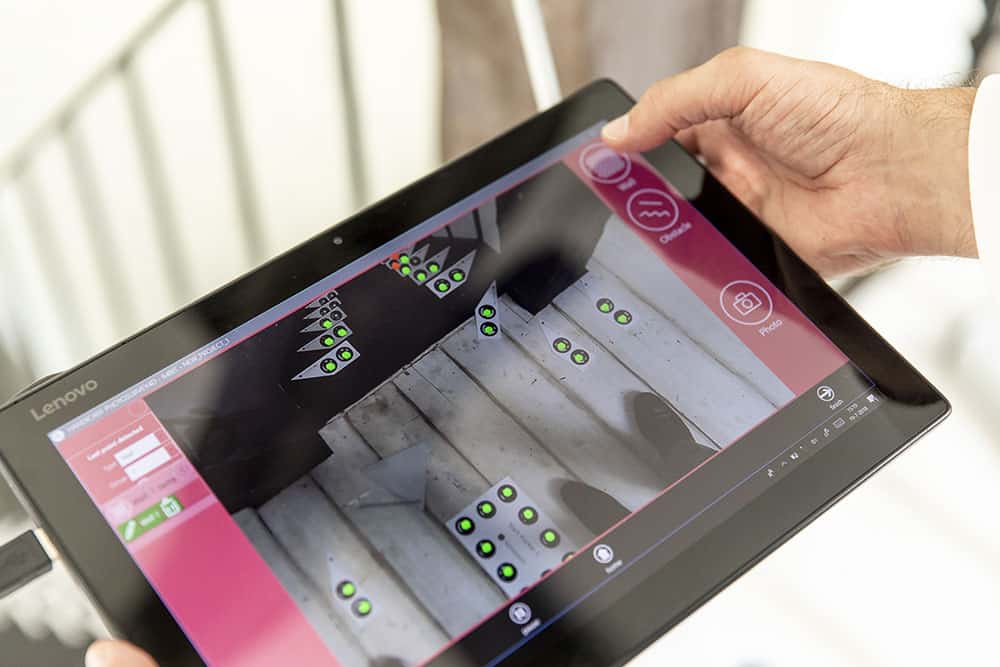 In addition to Handicare’s new 1100 stairlift development, the company also showcased and demonstrated its photo survey tool PhotoSurvey4D, aiming to reduce the time dealers spend measuring and freeing up time to spend with the end-user.

According to the company, the measurement tool allows dealers to complete a staircase measurement up to 40 steps within 10minutes before showing the end-user what the stairlift will look like in their home virtually.

Available in a slim case weighing only 3.5kg, Handicare says the new 4D version improves on the previous PhotoSurvey3D version but has kept the established user interface, enabling an easy switch over to the new version.

Importantly, the 4D includes a pointer that registers walls and obstacles, saving engineers from having to attach markers.

https://thiis.co.uk/more-about-handicares-dealer-day-2019/https://thiis.co.uk/wp-content/uploads/2019/06/More-about-1-1.jpghttps://thiis.co.uk/wp-content/uploads/2019/06/More-about-1-1-150x150.jpg2020-11-19T07:15:45+00:00Sarah SarsbySupplier SpotlightTrade FocusCompanion,Handicare,Handicare Dealer Day 2019,mobility dealers,Mobility Industry,mobility products,mobility retailer,StairliftsWhen people talk about corporate culture, it can seem like a rather lofty academic idea discussed in business classes, textbooks and lecture halls. Listening to the impassioned speeches and seeing the genuine enthusiasm demonstrated at Handicare’s Dealer Day in May however, it was clear to all in attendance that...Sarah SarsbySarah Sarsbysarah@thiis.co.ukAdministratorTHIIS Magazine