EXCLUSIVE: RMS Director reflects on 35 years in the rehabilitation and postural seating industry

On the cusp of taking a back seat at the end of this year, Wayne Cotter, Director of Rehabilitation Manufacturing Services (RMS), exclusively shares with THIIS his unique view on the changes and challenges he has seen over the past 35 years in the rehabilitation and postural seating industry.

By Wayne Cotter, Director, for a little longer, RMS

I joined Rehabilitation Manufacturing Services (RMS), or R&M Services as it was in those days on the 2nd January 1986 at the tender age of 21. My job was to recondition mainly 8/9 series wheelchairs for the local Medway Wheelchair Service.

Roger Thompson, who was both founder and boss at this time, quickly established that I could turn my hand to other things by way of manufacturing.

I had, prior to my joining RMS, undertaken building maintenance for a local company and gained City & Guilds in Site Carpentry. It was a slightly strange position as I had never set foot on a building site, yet had the qualifications to do so. A kind of ‘all the gear with no idea’ situation but in reverse.

What is more relevant of those days was how companies like RMS went about their manufacturing processes. CE marking and device regulation had yet to be invented or at least embraced.

All the Wheelchair Services around the country had their own ‘approved repairer’ although no one actually ever came to ‘approve’ you, or they would get the local garage to cut and shut the odd piece of tube together if appropriate. Almost everyone had their own agenda.

One thing though I have always felt is that the professionals working in the seating and postural management industry, and the NHS itself, by way of funding projects of that time, was nothing short of pioneering in its approach.

Indeed, I truly believe we would not be where we are today if not for the good people of that time and their tireless dedication.

I guess the only thing holding even greater progress back in those days was possibly communication. The world wide web didn’t exist until 1989 and even then, few people had access to it.

Things now are so much more global, the dissemination of anything invented or suggested on another continent today can be viewed tomorrow.

We communicate on a different level, at different speeds and we look to manufacture on a global basis – not just from a quantity or cost perspective, but from one of supply and quality.

Where is best place to get PU foam moulded? Sheet material bent and formed? Aluminium tube welded? CNC parts machined? Nowadays we can gather components from a multitude of different countries if the numbers allow.

CE marking, as mentioned, had a profound impact on our industry. This really was the demise of many of the ‘approved repairers’ modification work.

People within the industry started to question themselves and what they were asking of manufacturers, and more to the point who was liable if something was to go wrong.

For RMS, CE marking was embraced and led to a substantial upturn in its stature within the UK market. At this point, and we are talking 1995, RMS become more of a national company in regards of seating accessories and how they were perceived as a supplier.

Fast forward 10 years and this is where things start to get interesting.

The founders of RMS decided it was time to retire and unusually announced the fact prior to putting the company up for sale.

This enabled me to approach them in partnership with a couple of my colleagues and together we committed everything to the bank to buy the business, if we got it wrong, they were taking the house, gulp.

In one day, and after eight months of planning and paperwork, I went from Production Manager to Company Director and inherited the boss’s car.

From an industry point of view, taking over during this period probably couldn’t have been better timed. I hope our European friends don’t mind, but even as recent as 2005, the rest of Europe and even the world were, dare I say, slightly behind on seating and what our NHS colleagues had established all those years before.

I do appreciate that some of the big companies were pushing some of the boundaries, but others concentrated on the manufacturing aspect rather than the physical.

When we first arrived at Rehacare in 2005 my fellow directors, Alan Wombell and Del Bryant, both at that time still practising rehab engineers, stood still with shock.

These were great products with not-so-great posture, whilst the UK had great posture in very mediocre chairs. No one but no one at Rehacare was showing their latest invention in a 9L.

Since that time everything has changed and it’s as though the industry has become one single market of progress and invention. Just take yourself to one of the upcoming major exhibitions and you will appreciate what I mean.

This new circle of friends and colleagues we now mixed with, having established relationships across various parts of the globe, enabled another lift in company fortunes.

More importantly, it again allowed us to view what we were doing in a much more expansive way. Why not manufacture for these people and get some reciprocal trade going? It forced us to stop just looking at the UK market and think more globally.

This element and train of thought has been instrumental in allowing us to manufacture for a great number of other companies and feature each year at shows like PMG, Rehacare, Medtrade, and the Disabled Living Kidz to Adultz Exhibitions. The latter was due to our strength in paediatrics.

We have supplied every continent in the world at some point, and manufacture for those that do the same. We have established our own CNC Engineering facility that is totally autonomous from RMS – Simmonds Engineering Ltd – and constantly strive to address the needs of our customers and clients.

We have always invested heavily in R&D and constantly have multiple projects on the go at any one time. One thing that is guaranteed within this industry is change, and I’d suggest that both in relation to manufacturing and the development of new products RMS will be well abreast of the market for many years to come. 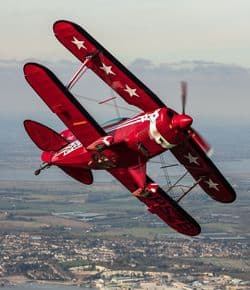 For myself, well the future is hopefully bright.

Although looking to take a back seat from RMS, I obviously still have a business interest in the operation and hope to dedicate time to other passions.

I have been fortunate in recent years to gain both a Private Pilot’s Licence and additional Aerobatic Rating giving me the chance to fly aerobatic aircraft.

Who wants a quiet retirement anyway? I may even look at other business projects if appropriate or subscribe to a non-executive role. I’m also seeking to undertake some form of voluntary work as sitting on my backside post-Christmas is not an option, apparently.

In conclusion I would have to say that being involved in our industry over the years has been a huge privilege and one that I would not want to change.

I have been able to associate with some great people who are immensely dedicated to our cause, especially within Schools, Wheelchair Services and the PT & OT community; and have seen a monumental change from those early days of the 1980’s. I was still making Spinal Carriages in the late 80’s.

Even just the name makes you go cold. If you’re far too young to remember what one looks like, just Google it and you will get images from an almost Dickensian era.

I hope personally I have been a positive influence in helping take RMS to its existing position and will look back fondly at projects like the move to our new building in Sittingbourne, establishing relationships with B2B clients and influencing positive change in R&D and manufacturing.

We even got involved with the film The Theory of Everything, making the replica chairs for the movie and supplying on location support at the time of filming. True Eddie Redmayne got the Oscar, but he did it with our help.

If I could have one wish as my career comes to a close it would be that RMS continues successfully for many years to come. This would be a great legacy for anyone who has worked at, been associated with, or been helped by the company over the last 45 years.

One thing is for sure. My work is my passion, and you may still see me walking around Rehacare next year for my own personal gratification, because hey, who doesn’t like a German sausage. It’s been an honour.