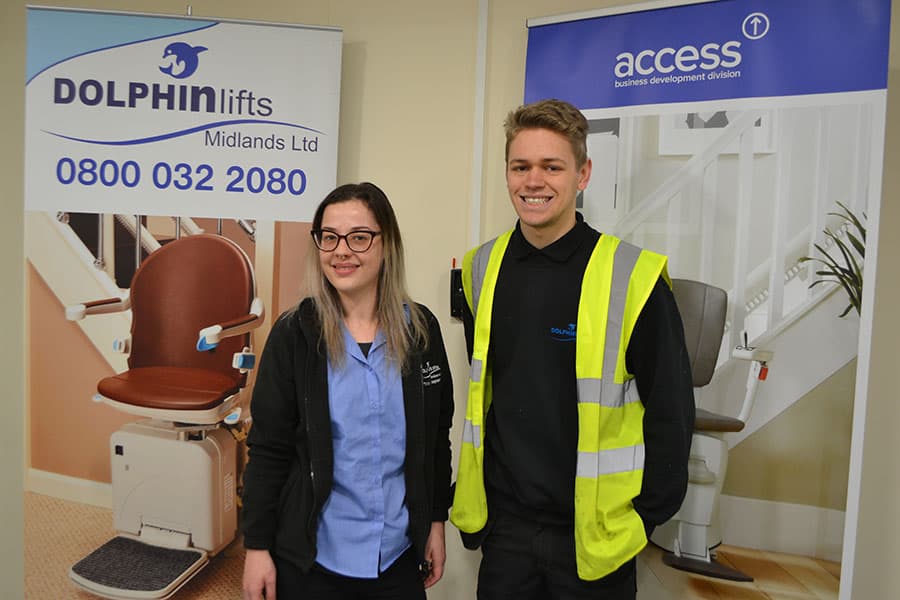 Having recently taken on two new apprentices from its local college, Tipton-based Dolphin Lifts Midlands’ HR Manager has stressed the need for companies to train the future engineers of the industry.

The West Midlands stairlift and access provider has recently taken on apprentices David Rowlett and Josh Taylor from Sandwell College with the aim of bringing their enthusiasm for engineering to the independent living industry.

“For us, recruiting engineers is always a challenge and with most of our engineers being in their late 30’s or early 40’s we are very aware that there could be a gap in a few years’ time so by taking on apprentices now and in the future we will hopefully have the next generation already in place.”

Explaining his decision to apply to Dolphin Lifts Midlands, David said: “My father and brother are both engineers and I have always had an interest in engineering so when I saw this opportunity, I knew I had to apply.  Everyone here at Dolphin has been really helpful and the good thing about my apprenticeship is that I am learning something new every day.

“I think it is great that companies invest in apprenticeships and would like to say a big thank you to Katie and everyone else at Dolphin for making me feel so welcome.”

As part of his apprenticeship, David will be working four days a week and attending college on the fifth day.

The call for companies to invest in tomorrow’s engineers in the sector comes following National Apprenticeship Week which took place from the 3rd to the 9th February 2020.

“National Apprenticeship Week is a great way to hopefully encourage more companies to get involved and invest in the future as it is so important,” added Katie.

“There is a huge skills gap in many areas, not just engineering but across the board, so by going through the apprenticeship route, the employer gets the chance to train someone who will hopefully work with them for many years to come and the apprentice gets the skills of the trade they need along with an education.

“I would certainly urge other companies to follow our lead and get involved as it is incredibly rewarding for all concerned.”

Established over 30 years ago, Dolphin Lifts Midlands installs, services and repairs a wide array of access solutions across the Midlands, including stairlifts, wheelchair lifts, through the floor lifts and hoists, to the public sector and private customers.

In the March issue of THIIS, Managing Director Lee Farrington and General Manager Steve Wilson discussed a number of topics in the stairlift sector, with a fascinating insight into the growing second-hand market and the increasing popularity of products sold on online marketplaces.