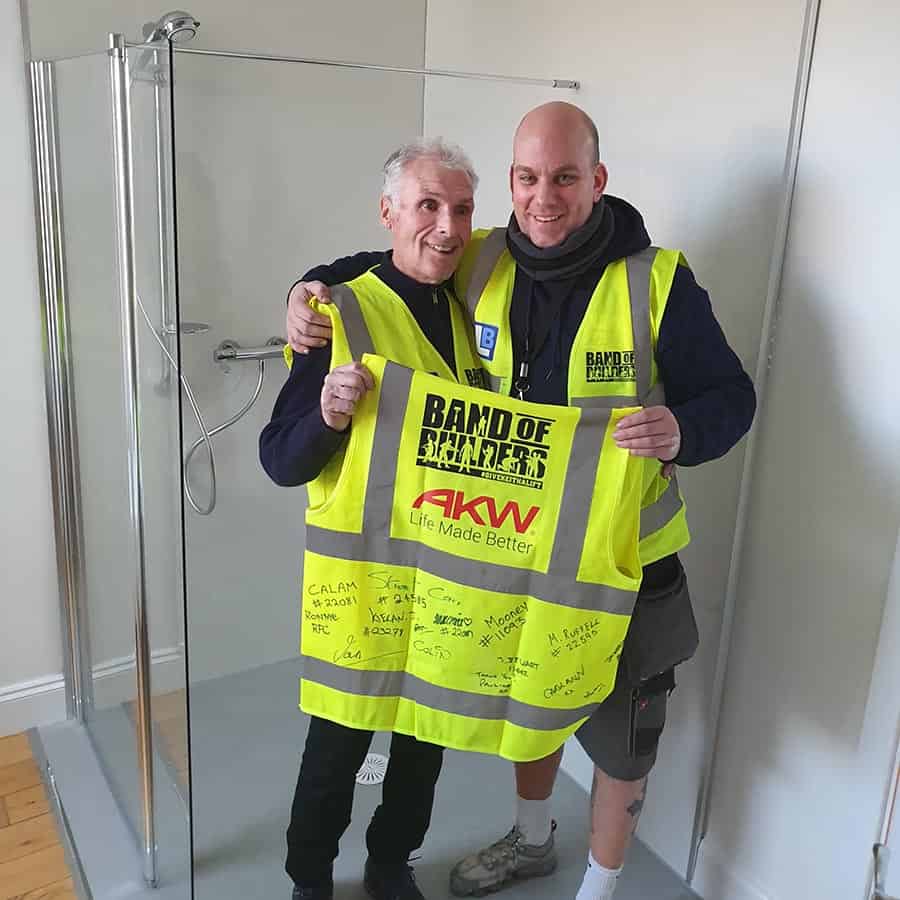 In its latest bid to help a Scottish plumber with motor neurone disease (MND) live out the remainder of his days comfortably at home, construction charity Band of Builders has partnered with AKW to fit out the family home with an accessible wet room.

The Band of Builders has built its reputation as a charity on uniting members of the construction industry through helping others.

Ronald Macleod, aged 63 and known as Ronnie, was diagnosed with advancing MND in June 2018 following tests for deteriorating speech. Tragically, on the day of his diagnosis, his son was also diagnosed with oesophageal cancer and died at the age of 40.

Ronnie’s aggressive form of MND is known as Progressive Bulbar Palsy (PBP), which involves the brain stem and it has led to difficulties with speech and swallowing and as a result, Ronnie is now tube-fed. Initially given just 18 months to live, Ronnie has already surpassed doctors’ expectations and he will shortly be involved in trialling a new drug.

Following his release from The Prince and Princess of Wales Hospice in Glasgow, it became clear that the family home needed a downstairs wet room to provide for Ronnie’s increasing physical needs.

A plumber since 15, Band of Builders heard about Ronnie’s challenges and wanted to do everything they could to help this tradesman at such a tough point in his life.

A team of seven volunteers came together via Band of Builders to carry out the work to transform a downstairs room into a wet room and keen to offer their support to a tradesman in need, UK accessibility solutions specialist AKW provided everything needed to equip the wet room.

Andrew Woore, Midlands Business Development Manager at AKW, commented: “When Band of Builders approached us asking if we wanted to get involved with helping Ronnie, I understood what the family was going through, as my own father suffered with MND.

“I am so pleased that we have been able to provide the entire wet room via our AKWOne one-stop shop service. By helping Band of Builders in this way, we have played our part in making life better for one family, something we are passionate about here at AKW.”

The wet room installation, carried out over three days, has transformed the life of Ronnie and his family. By creating a fit for purpose bathroom at their home in Glasgow, Ronnie now has the appropriate hygiene facilities he needs to make each day that little bit easier.