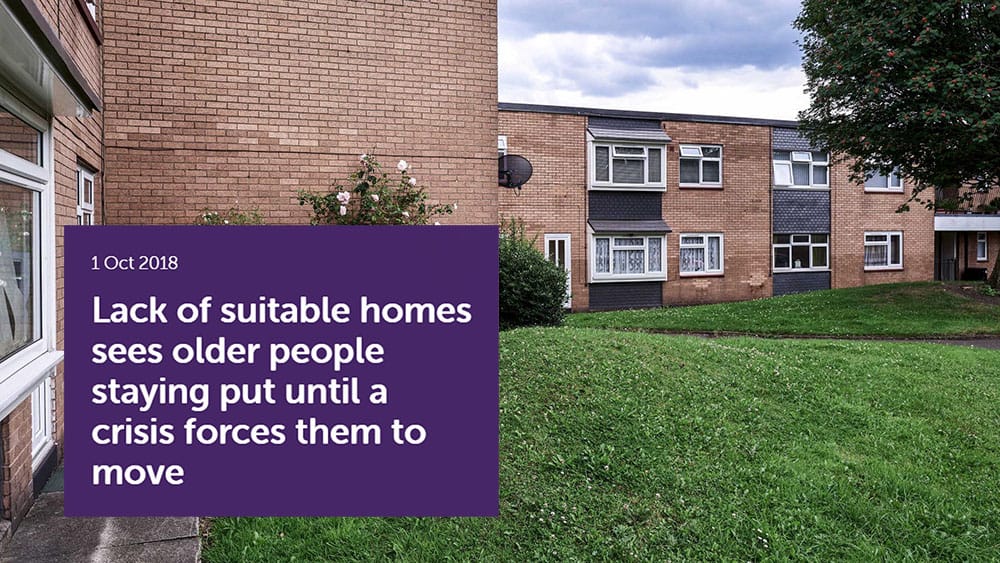 New research from Greater Manchester Combined Authority has found that many older people are staying in their houses until a sudden crisis, like divorce, eviction or health issues, forces them to move.

Commissioned by Greater Manchester Combined Authority and funded by the Centre for Ageing Better, the report – ‘Rightsizing: Reframing the housing offer for older people’ – considers the types of houses older people live in around the UK, the sort of house moves they make and the reasons why.

The report highlights that whilst it is often assumed that older people want to move into smaller homes as they age, Greater Manchester Combined Authority’s research instead shows that they still want nice accommodation as younger people do, such as more space for guests or living in a nicer area.

Taking this into consideration, ‘Rightsizing: Reframing the housing offer for older people’ is calling for UK local authorities, planners and developers to focus on ‘rightsizing’ instead of downsizing when it comes to planning housing provision for older people.

Greater Manchester Combined Authority defines ‘rightsizing’ as an older person’s choice to move home as a means of improving their quality of life.

Rachael Docking, Housing Lead at the Centre for Ageing Better, said: “It’s often assumed that people want to ‘downsize’ to more manageable properties as they age. In fact, people in later life have the same desires to improve quality of life as any of us.

“We need to move away from a focus on delivering homes ‘for older people’ and deliver an adequate and diverse supply of adaptable, accessible housing that’s fit for people of all ages.”

By local authorities, planners and developers delivering better and more accessible housing options, it ensures that older people have access to the homes they want.

The report also outlines that a lot of people over 50 cannot move home in the way that they want to due to a lack of suitable housing options and inadequate provision of support and advice. Additionally, older people on low-middle incomes often find themselves trapped in homes which are no longer suitable for them due to health conditions.

If local plans look into more adaptable housing options within existing communities, says the report, then older people will be able to move into homes which meet their requirements and aspirations to improve their quality of life, regardless of income.

“Rightsizing re-frames the housing offer for older people in terms of the actual availability and accessibility of the options they need and desire. While this requires housing strategies to engage more fully with the local circumstances of older people, we believe it releases great potential for positive action.”

https://thiis.co.uk/report-calls-for-more-diverse-and-accessible-housing-to-suit-needs-and-wants-of-older-people/https://thiis.co.uk/wp-content/uploads/2018/11/Rightsizing-1.jpghttps://thiis.co.uk/wp-content/uploads/2018/11/Rightsizing-1-150x150.jpg2018-11-07T15:26:32+00:00Calvin BarnettHousingNewsroomReports & ResearchThird SectorAgeing Better,Centre for Ageing Better,Greater Manchester Combined Authority,housing adaptations,housing report,housing research,report,rightsizingNew research from Greater Manchester Combined Authority has found that many older people are staying in their houses until a sudden crisis, like divorce, eviction or health issues, forces them to move. Commissioned by Greater Manchester Combined Authority and funded by the Centre for Ageing Better, the report – ‘Rightsizing:...Calvin BarnettCalvin Barnettcalvin@thiis.co.ukAdministratorTHIIS Magazine