Having teased of the imminent launch of its new, compact powerchair in the spring, Quantum Rehab has now unveiled its new ‘Stretto’ model, with the company declaring that the “small but mighty” powerchair will be a gamechanger for the European market.

Giving visitors to Naidex 2019 a sneak preview in March, the company told THIIS in May that it was busy developing a model that would enable it to stand out from the competition. Half a year on and the company has revealed its new Edge 3 Stretto to dealers in the UK, receiving a soundly positive reaction from the trade.

Back in September 2018, the company released its popular Edge 3 powerchair, boasting a number of features that helped distinguish itself in the competitive segment, including its enhanced 4.5mph iLevel innovation, patented Extra Stability Technology, upgraded SRS (Smooth Ride Suspension) and Interactive Assist capability.

Speaking with Kevin Atkins, Senior Sales Manager at Quantum Rehab, back in May, he explained that following the success of the Edge 3, the company was investing in releasing a new model to better meet the needs of the UK market.

“It is something our customers have been asking for,” he told THIIS.

“They tell us that they love the Quantum range but they want a slightly smaller version suitable for indoor use, but still with great outdoors capabilities, so the US team has responded and we have something very special to bring to the market later this year.” 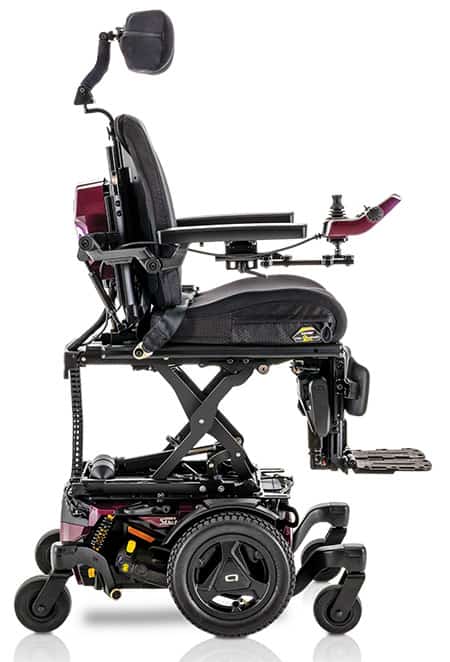 Unveiling the new product to a room full of its trade partners at the end of November, Quantum says it will now aim to gain ground on other players in the compact mid-wheel drive segment with its new Edge 3 Stretto, promising it goes beyond anything else on the market.

Incorporating all the same technology found in the Edge 3, including the lauded iLevel technology, the narrower and more compact 52cm (20.5”) wheelbase of the Stretto creates a much narrower footprint to enable users to navigate tighter indoor spaces easier whilst still enabling them to conveniently reach new heights.

Also including 62amp batteries for greater range and various wheel size options, the new model opens up all of the Edge 3’s impressive features to adults looking for a compact powerchair, along with the paediatric market which requires all of the benefits offered on the Edge 3 but without such a large-sized powerchair.

Discussing the launch of the Stretto, Kevin told THIIS: “The feedback from our customers has been fantastic. Everyone is loving the style and performance of the Edge 3 Stretto. The market has been waiting for this!”

The new Edge 3 Stretto is available now for Quantum’s trade partners to order.

https://thiis.co.uk/quantum-rehab-declares-stretto-will-give-it-the-edge-in-the-compact-mid-wheel-drive-powerchair-market/https://thiis.co.uk/wp-content/uploads/2019/12/Quantum-Stretto-Sugar-Plum.jpghttps://thiis.co.uk/wp-content/uploads/2019/12/Quantum-Stretto-Sugar-Plum-150x150.jpg2019-12-02T10:21:44+00:00Calvin BarnettNewsroomSupplier NewsTrade NewsAmerica,Edge 3,Edge 3 Stretto,Europe,iLevel,mid-wheel drive,powerchair,Pride Mobility,Quantum Rehab,USAHaving teased of the imminent launch of its new, compact powerchair in the spring, Quantum Rehab has now unveiled its new ‘Stretto’ model, with the company declaring that the “small but mighty” powerchair will be a gamechanger for the European market. Giving visitors to Naidex 2019 a sneak preview in...Calvin BarnettCalvin Barnettcalvin@thiis.co.ukAdministratorTHIIS Magazine