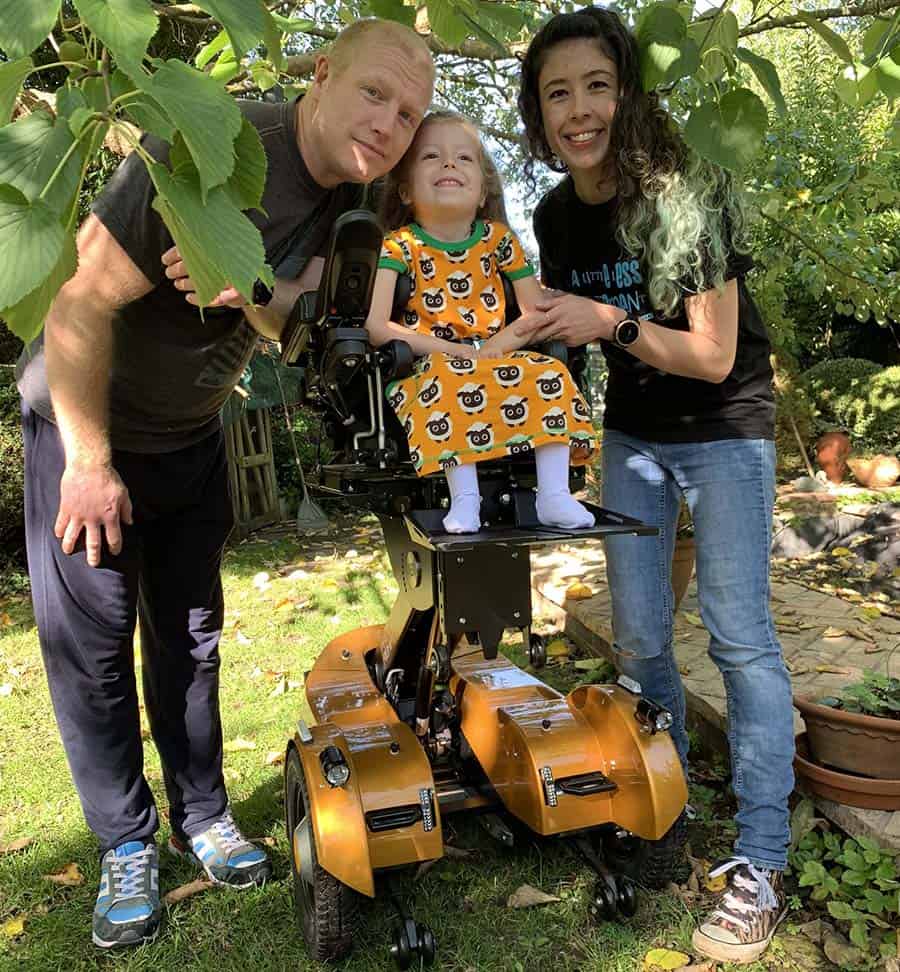 Having outgrown her Wizzybug chair, Lily’s parents, Tamara and Nick, turned to social media to find out about which new powerchair might be suitable for their young daughter.

It was there that the family found out about Precision Rehab and after doing some more research, decided to enquire about the Piccolino powerchair.

“I had a look at Precision Rehab’s website and found they had the exact powerchair we had been looking for – the Piccolino, as it had the seat lift and tilt in space along with many other brilliant features which we knew would really benefit Lily,” explained Lily’s mother Tamara.

“During the first assessment, we had concerns that the standard Piccolino seat size would be an issue as Lily is so small.  However, Matt immediately put our minds at rest by explaining there are various bespoke options that would work for her.”

Originally, Lily had been set to receive the Piccolino with a range of bespoke modifications to make its larger seating system work for her. Some months after the point of ordering, however, the new K110 seating system had become available and Precision Rehab’s Managing Director Matthew James was keen to offer the ideal new solution to the family.

“Matt explained that the modifications would now not be necessary as Paravan had developed the new smaller seat and Lily would be the first child in the world to have a K110 seat fitted to her new chair which was amazing,” added Tamara.

Boasting a starting width and depth of just 24cm, the K110 has been designed to accommodate very young and small first-time powerchair users.

The seating system reduces the need for modifications, such as side supports and upper body supports, required to ensure larger systems are comfortable and provide adequate postural support for smaller users.

In August, Precision Rehab delivered the powerchair, which has been finished in a standout gold.

Precision Rehab’s Matthew explained that the new seating system aligns with its ethos of ensuring the chair fits the person, as opposed to the person fitting the chair. Highlighting that he knew he could modify the existing Piccolino seat to fit Lily, Matt emphasised that having a seat system which would provide the support Lily required without additional modifications was the best outcome.

According to Lily’s family, the change in the young powerchair user’s confidence and independence was immediate once she started using her chair.

“The difference Lily’s new chair has made is amazing,” commented Lily’s father, Nick.

“Lily had never been able to sit up on her own but she can now recline or sit up independently making daily activities most people take for granted such as sitting up at the table for family meals or talking to people face to face much easier thanks to the various functions on her Piccolino.  We have not had many days out due to COVID-19 but just being able to hold Lily’s hand on a walk instead of pushing her chair is so rewarding as I am sure any parent would agree.”

Precision Rehab’s Matthew James finished: “We always strive to provide our clients with the best possible powerchair solution and hearing how happy Lily and her parents are makes all the hard work worthwhile.  We wish Lily many years of fun in her Piccolino.”

Recently, the powerchair retailer and distributor used its expertise to craft a unique mobility solution for new parents and wheelchair users Luke and Yasmin Hamill and their newborn child.