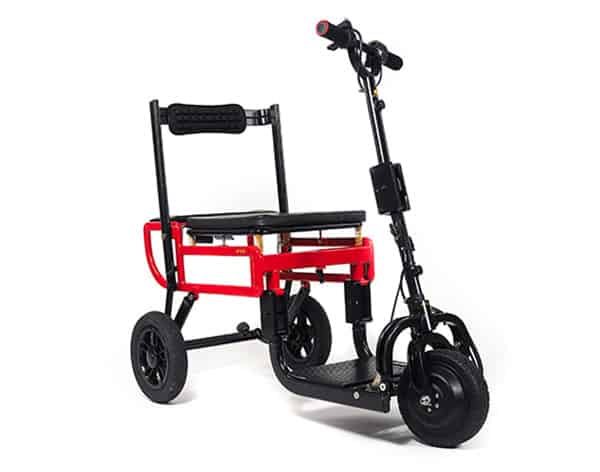 eFOLDi, the designer and manufacturer of the award-winning eFOLDi scooter, now has a fully tested prototype of its lighter, sleeker Mark 2.0 version and is preparing to bring the new folding scooter to the mobility market.

No stranger to a crowdfunding campaign, after receiving over £939,650 in pledges from 746 investors in May 2018, eFOLDi is taking to crowdfunding again to raise additional finance to needed to put its eFOLDi Mark 2.0 into mass production.

Designed by Sumi Wang, MD of eFOLDi, and her father and inventor Jianmin Wang, after the latter broke his leg in 2012, the eFOLDi is a folding mobility scooter centred around portability and discretion.

Following years of development, the company launched a crowdfunding campaign on Crowdfunder in 2016, successfully raising more than £100,000. At the end of the same year, eFOLDi created and sent out its first models to its crowdfunding pledgers, who became the company’s first product testers.

After the testing and trialling phase, the company redesigned the original eFOLDi from extensive feedback and launched the award-winning product to the market in 2017.

In spring 2018, eFOLDi launched a new crowdfunding campaign through Crowdcube, aiming to secure £350,000 for five percent equity of the company, however, the campaign turned out to become a runaway success. Closing the campaign in April last year, eFOLDi exceeded its original target by over 200 percent, having raised almost £1 million from over 700 investors.

Discussing the value of crowdfunding with THIIS in 2018, Sumi commented: “Crowdfunding is great, especially if you have a good product. It’s much better and start-up friendly compared to traditional fundraising and it’s fun!”

The major finance boost was used by the company to ramp up production, increase marketing reach, penetrate new markets, as well as invest in further product development.

The result of the product development is the company’s all-new eFOLDi Mark 2.0, with the company announcing it has now got a fully tested prototype of its Mark 2.0 which it says fuses together everything its user community would hope for.

Consisting of 200 components, the latest iteration of the eFOLDi features a comfortable foot platform; improved braking; and a lighter, sub-15kg carrying weight thanks to the new design’s magnesium frame.

Additionally, the mobility scooter includes removable rear wheels and battery, reducing the weight further to around 12kg, which the company says is markedly lighter than the eFOLDi Mark 1.5.

Now with its prototype in hand, the company is planning to launch a short Kickstarter crowdfunding campaign to provide additional finance for the tooling and manufacturing preparation needed to manufacture at scale, as well as a means of securing firm pre-orders.

Potentially launching the campaign at the end of May, eFOLDi has also shot “pre-marketing” videos featuring the Mark 2.0, ready to use on the crowdfunding platform.

The mobility scooter manufacturer has successfully used video in the past to drive awareness and sales, having run a television advert campaign at the end of 2018.

https://thiis.co.uk/new-generation-folding-scooter-prepares-to-kickstart-production-with-crowdfunding-campaign/https://thiis.co.uk/wp-content/uploads/2019/05/eFOLDi-Mark-2.jpghttps://thiis.co.uk/wp-content/uploads/2019/05/eFOLDi-Mark-2-150x150.jpg2019-05-02T08:48:36+01:00Calvin BarnettInvestments & FundingNewsroomSupplier Newscrowdcube,Crowdfunder,crowdfunding,efoldi,eFOLDi mark 2,folding scooter,Kickstarter,manufacturing,mobility scooter,production,sumi wangeFOLDi, the designer and manufacturer of the award-winning eFOLDi scooter, now has a fully tested prototype of its lighter, sleeker Mark 2.0 version and is preparing to bring the new folding scooter to the mobility market. No stranger to a crowdfunding campaign, after receiving over £939,650 in pledges from 746...Calvin BarnettCalvin Barnettcalvin@thiis.co.ukAdministratorTHIIS Magazine