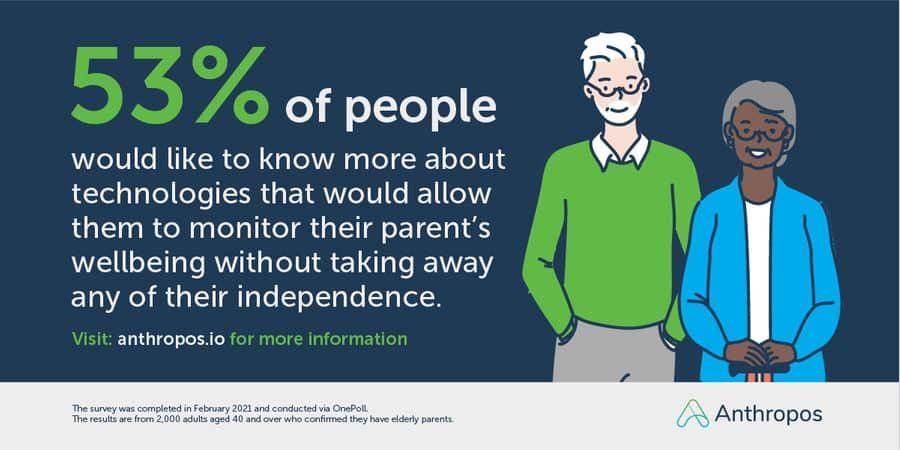 More than six in 10 adults admit the COVID-19 pandemic has heightened their fears and worries for their parent’s futures, according to research by connected care platform Anthropos.

A study of 2,000 adults aged 40 and over with elderly parents found half felt the restricted contact during the lockdowns has made them think about how they will care for them in years to come.

For 57 per cent, COVID has given them a glimpse at what life for their parents could be like if they were unable to check in on them regularly. More than four in 10 adults worry that their parents will be isolated and alone, while one in three are concerned about the risk of falls.

Other fears reported in the study was that elderly parents are not eating and drinking properly; they aren’t safe and secure in their home and that they aren’t as active as they should be. As a result, 62 per cent have made more effort to call their parents on the phone during the pandemic.

Happily, 43 per cent of adults said that their parents are now better than ever before at using technology – after becoming adept at communicating via the likes of social media, Facetime and video calls.

As a result, the research found, seven in 10 firmly believe their parents would now be more open to considering some sort of passive, non-intrusive technology in their homes.

The research was carried out by Anthropos, a platform that connects to a range of smart devices and sensors allowing care companies and family members to monitor the daily routines of isolated older people.

Jim Patience, CEO of Anthropos, said: “For many people, the pandemic will be the longest they have spent apart from loved ones, particularly elderly parents.

“And it seems this time of limited contact has undoubtedly increased concerns of their safety and wellbeing with limited additional care available at present.

“Thankfully, there are new technologies available that help families to stay connected: not just smartphones, but other internet enabled devices.

“Being able to know that your elderly family members are okay or of they need help, even when you can’t be in the same room, can go a long way to providing reassuring that their relatives are getter the care they need.”

The study found technology has played a crucial role during the pandemic with 43 per cent of adults admitting their parents are far better now at using smartphones and laptops to stay connected with them.

Before the lockdowns, 66 per cent of adults reported that they felt guilty if they didn’t phone or text their parents daily. The average adult would see their elderly loved ones four times a month and speak to them on the phone on 11 occasions.

But during the pandemic, 32 per cent of adults reported that their elderly parents were becoming proficient at conversing over video calls; 19 per cent were communicating by text and 14 per cent even embraced social media.

To combat any anxiety they may have, more than half of adults reported that they would like daily updates from their parents on how they are feeling, with 11 per cent wanting information in real time. More than a quarter would also like them to use care technology, such as monitoring devices.

And while 74 per cent of adults haven’t yet broached the subject of future care options with their parents, four in 10 believe their parents would be willing to use technology to help reassure them they are okay as they get older.

More than half of those polled via OnePoll stated that they would like to know more about technologies which would allow them to monitor the behaviour and movements of their parents, without taking away any of their independence.

Jim added: “Older people want to remain independent and that explains the increased willingness to look at technological solutions. It is also a key reason why so many adults often put off the question about needing additional care.

“However, technology to support them in a non-intrusive way can be a great first step in reassuring the bond and safety among family members.”

https://thiis.co.uk/more-than-six-in-10-adults-admit-they-fear-for-their-parents-future-after-the-pandemic/https://thiis.co.uk/wp-content/uploads/2021/03/Snippet_1.jpghttps://thiis.co.uk/wp-content/uploads/2021/03/Snippet_1-150x150.jpg2021-03-03T11:44:44+00:00Liane McIvorCOVID-19 Sector NewsNewsroomReports & ResearchSector NewsThird SectorAdults,Anthropos,connected platform,COVID-19,eldrly,isolated,technologiesMore than six in 10 adults admit the COVID-19 pandemic has heightened their fears and worries for their parent's futures, according to research by connected care platform Anthropos. A study of 2,000 adults aged 40 and over with elderly parents found half felt the restricted contact during the lockdowns has...Liane McIvorLiane McIvorliane@thiis.co.ukAdministratorTHIIS Magazine