Jenx staff complete half marathon to raise over £2,500 for local charity 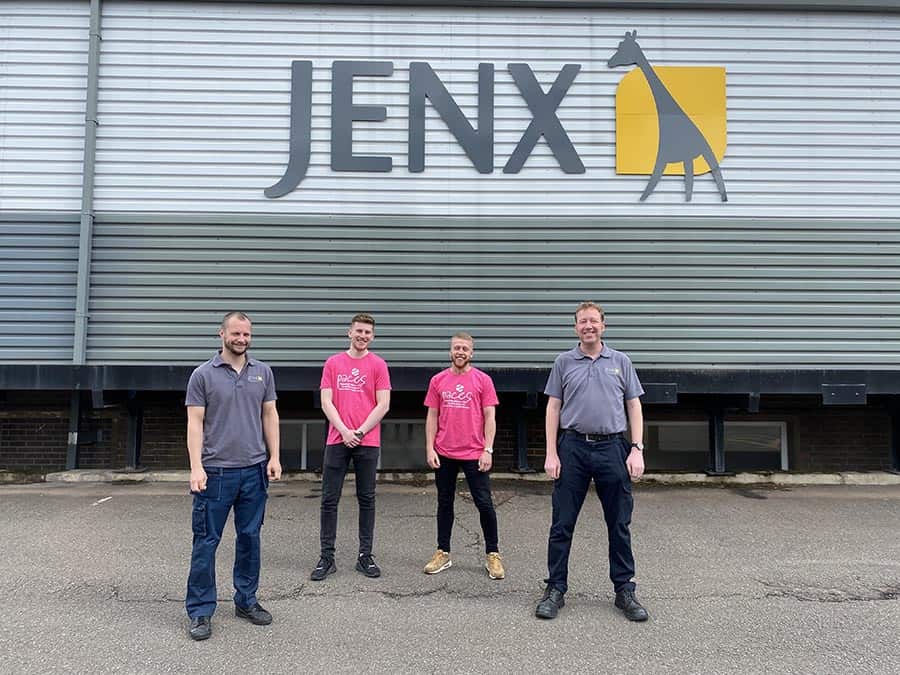 Four employees from postural specialist Jenx have raised over £2,500 for a local charity by running the London Landmarks Half Marathon.

Jack Wilson, Sam Hyden, Will Denbigh and Steve Blake completed the 13.1 mile challenge on 1st August, which saw them racing past some of London’s most iconic landmarks including St Paul’s Cathedral, Big Ben, Nelson’s Column and the London Eye.

The money raised through JustGiving will be donated to Paces, a specialist centre, charity and school for individuals and families living with cerebral palsy and motor disorders based in Sheffield.

Paces was chosen by Jenx and its UK distribution division Jiraffe as their Charity of the Year for 2021. As part of the partnership, the three organisations work together to arrange events and fundraisers that support Paces’ transition into its new home at Thorncliffe Hall, which will allow them to support three times as many families.

Jack Wilson, Design Engineer at Jiraffe, said: “The London Landmark Half Marathon was absolutely incredible. The support through the whole run was electric with loads of spectators and DJ stations pushing you on.

“I aspire to take on a different physical challenge every year, so I thought it was perfect when this opportunity arose as it was also a chance for myself and the rest of the team to support a fantastic charity like Paces.”

Jenx is a family-run company founded back in 1982 by a paediatric physiotherapist and a product designer with the aim of enriching lives and changing perceptions about disability.

Holly Jenkins, Director of Jiraffe, added: “I’d like say an enormous thank you to Jack, Sam, Will and Steve for helping to raise such a substantial donation for Paces.

“Paces is an incredible organisation doing vital work that’s helping children living with cerebral palsy and other motor disorders to achieve their personal goals and aspirations. I’m so proud of everyone at Jenx and Jiraffe for coming together to support them.”

David Hall, Paces Corporate Fundraising Manager, commented: “It was an absolute pleasure to be part of the team with the guys from Jenx. The day from start to finish was fantastic and we are so grateful to the Jenx team for supporting us whilst taking on the marathon.

“The money they have raised will go towards the life changing work that goes on here at Paces and will ensure our children and adults can continue to receive first class support.”

Jiraffe, part of Jenx, is currently looking for a home-based Product Advisor in South East England. Discover more about the role and how to apply here

https://thiis.co.uk/jenx-staff-complete-half-marathon-to-raise-over-2500-for-local-charity/https://thiis.co.uk/wp-content/uploads/2021/08/Jack-Wilson-Sam-Hyden-Will-Denbigh-Steve-Blake.jpghttps://thiis.co.uk/wp-content/uploads/2021/08/Jack-Wilson-Sam-Hyden-Will-Denbigh-Steve-Blake-150x150.jpg2021-08-12T09:40:19+01:00Sarah SarsbyNewsroomSupplier NewsTrade NewsJenx,Jiraffe,Paces,postural support equipment,postural support specialistFour employees from postural specialist Jenx have raised over £2,500 for a local charity by running the London Landmarks Half Marathon. Jack Wilson, Sam Hyden, Will Denbigh and Steve Blake completed the 13.1 mile challenge on 1st August, which saw them racing past some of London’s most iconic landmarks including...Sarah SarsbySarah Sarsbysarah@thiis.co.ukAdministratorTHIIS Magazine