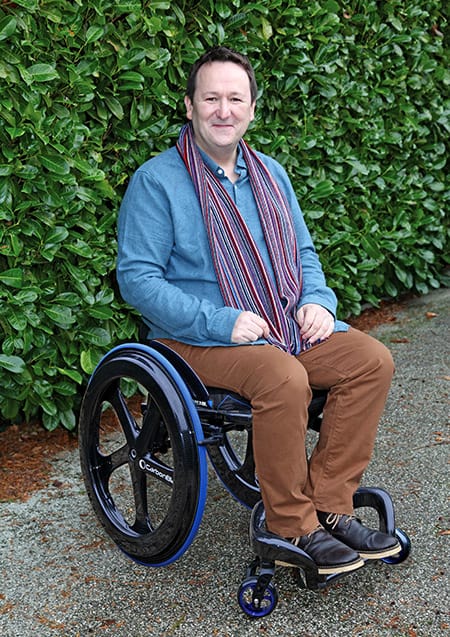 Having recently made an appearance in Netflix’s latest Star Trek series, Carbon Black System were showcasing its futuristic wheelchair to visitors at this year’s Naidex and told THIIS that it is keen to establish a dealer network for its premium carbon wheelchair.

Originally created by Andrew Slorance, the Carbon Black wheelchair was a unique premium wheelchair that was highly praised by wheelchair users due to its distinctive design and completely carbon fibre production.

Three times the strength of steel, Carbon Black’s innovative carbon fiber is moulded into an ergonomically designed form that is stylish, lightweight and futuristically minimalist in appearance, according to the company.

Speaking with Paul Strudwick, CEO of Carbon Black System, he told THIIS that whilst the original was admired and commended on its revolutionary aesthetics, the high price tag made it unattainable for the majority of wheelchair users.

Determined to deliver a sleek and stylish wheelchair that would be more accessible to the market, Carbon Black Systems completely changed its manufacturing process explained Paul, with the newly released Carbon Black 2 (CB2) entering the market at a cost significantly lower than its predecessor.

“We found with the original that people would tell us it was a great product but it was just too expensive. Now, when we tell people the price, they say it is less than they expected,” Paul said at the company’s business Naidex stand.

“Before, the entire chair was made bespoke for a customer, from start to finish, which resulted in a completely unique product but also high production costs and long lead times. With the CB2, we still offer a range of bespoke options but this is more related to the finish of the chair.”

Having adjusted aspects of the manufacturing process and the chair’s design, the CB2 is now at a competitive price point highlighted Paul, with lead times cut from three months to four weeks.

“Customers can now completely modify the finish of their Carbon Black to make it their own,” continued Paul.

“There are matt and gloss options available and we offer custom hand paint finishes or hydro-dipping to really allow customers to add their own personality to it.”

Emphasising how important the individual, stylish design of the chair is to users was BBC Presenter Mark Lane, a brand ambassador and CB2 user who was also at the show.

“I love the product and it really is the wheelchair of the future. I came across it four years ago and thought it was phenomenal but the price was high. Now the cost has really reduced, I think it is a special product that has managed to achieve some incredible – when users are in a CB2, people see the person first, rather than the wheelchair,” commented Mark.

“It means people are no longer defined by their chair and I think the Carbon Black has a uniqueness and individuality that is lacking in other chairs on the market.”

The company successfully raised funds via crowdfunding platform CrowdCube in 2018, with individuals collectively raising over £340,000 which it will use to penetrate the domestic UK market, as well as Europe and the US, where it is awaiting FDA approval.

Planning to attend trade shows globally to raise awareness of the mark II version of its wheelchair, including the New York Abilities Expo in May, the company is also keen to build its dealer base domestically.

“We are looking for mobility dealers across the UK that are willing to really get behind the product, rather than just have it sat in the corner of a store, collecting dust next to other chairs” said Paul.

“Dealers that are looking to offer their customers something special in the active wheelchair market are the ideal dealers we are looking to work with and we are willing to give exclusivity to dealers that share our enthusiasm.”