Leading manufacturers in the mobility and access trade at the British Healthcare Trade Show (BHTS) in Leeds yesterday reported on a very successful day meeting up with both new and existing retailers.

The trade-exclusive event, which was sponsored by Motion Healthcare and delivered in partnership with the British Healthcare Trades Association, THIIS Magazine and Promoting Independence, took place at the Weetwood Hall Estate. It offered a chance for mobility equipment suppliers to reconnect with retailers in a relaxed, COVID-secure space.

Rehasense UK said that it used the trade-only event to showcase several examples from its portfolio of mobility solutions, including the recently launched Space CF rollator, Icon 35 lightweight manual wheelchairs and the Trackwheel.

Jordan Day, Business Development Manager at Rehasense UK, said: “After a challenging time for everyone, it was fantastic to once again attend an event where you could engage with members of the trade in a relaxed environment.

“During the day we had some extremely positive conversations with existing and potential retailers all of whom commented on the quality of the product range on show. I would also like to say well done to Calvin and the team at the BHTA for organising a great day.”

Josh Coles, Marketing Manager at Scooterpac said that he found the day to be “very positive” for showcasing the firm’s products to retailers. He commented: “We have had a lot of dealers come up to us on our stand that we haven’t seen or spoken to for a while.

“They have seen the product we’re planning to launch later this season, the Invader, and because it’s so different and nothing like it on the market they’ve been really impressed. It’s been an eye-catcher.

“One thing we have always set out to do at Scooterpac is bring products out to market that are different, that maybe sometimes that aren’t niche but they offer a solution that no one else is offering.

“That’s what we’ve been doing with the Invader today. It’s been so lovely to share that with people and get their feedback as well about tweaks we can do and things that need to be done to it before it comes to market.”

Greg Whelan, Marketing and Product Manager at Apex Medical regarded the show as a pivotal platform for the promotion of its new and successful launch of the Apex Partner Programme.

He commented: “For Apex the BHTS has been a really important place to come because of the location but also the sector. For us, we want to engage closely with stores, in particular in the northern part of the country and Scotland and we’re seeing a lot of people from those areas, and the response from that has been superb.”

Graham Collyer, Executive Chairman of Sumed International added: “As well as other products we sell to dealers, we were showcasing the Integrity static cushion range, which has been launched in the last couple of months.

“The static cushion range is available from entry level through to very high risk in three different weight ranges, made very easy to understand by users and dealers.

“The BHTS has had a nice and relaxed atmosphere. People have been wondering through, wanting to chat and engage.”

Retailers also reported their satisfaction of the event. Camilla Griffiths from Easy Living Mobility enthused: “It was a fantastic medium-sized location. We weren’t going with too much expectation but thought the show was very well laid out and organised.

“There were a good variety of suppliers there and we as a business took so much away from the event. It was great for networking and we would like to see this take place again.”

Jamie from Ability Superstore commented: “After over a year of mainly seeing people on Zoom and living through the uncertainty of lockdowns in a pandemic, it was fantastic to see a bit of normality returning.

“The idea of having the trade show in the north was a winning idea. The venue was stunning and the event was superbly organised with COVID-safe measures. It was great to meet face-to-face with colleagues in the mobility aid industry that I had only been able to email.

“I left Leeds feeling inspired with some ideas to take back to the team here at Ability Superstore.” 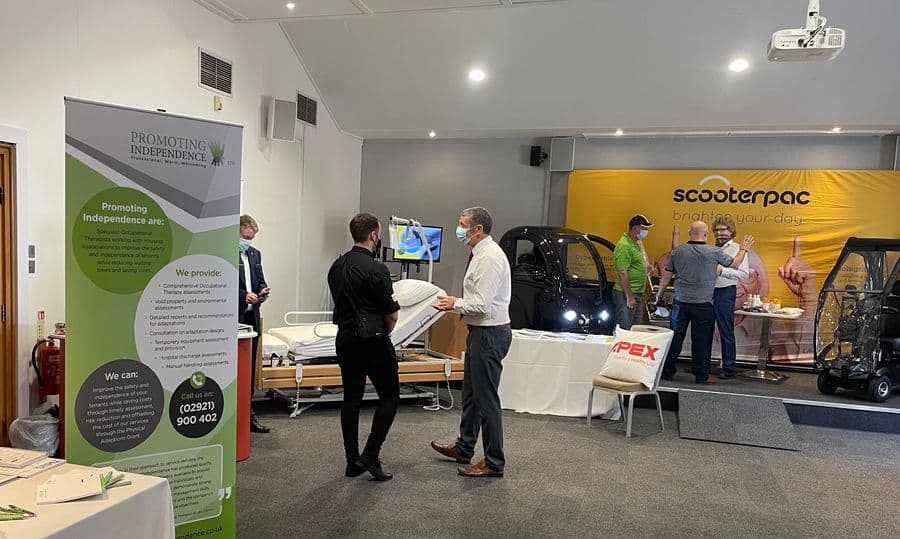 https://thiis.co.uk/exclusive-mobility-trade-exhibitors-report-on-a-very-successful-british-healthcare-trade-show/https://thiis.co.uk/wp-content/uploads/2021/06/BHTS_1.jpghttps://thiis.co.uk/wp-content/uploads/2021/06/BHTS_1-150x150.jpg2021-06-16T12:48:53+01:00Liane McIvorBHTSEvents & ExhibitionsNewsroomRetailer NewsSupplier NewsTrade Newsaccess,BHTS,manufacturers,Mobility,suppliersLeading manufacturers in the mobility and access trade at the British Healthcare Trade Show (BHTS) in Leeds yesterday reported on a very successful day meeting up with both new and existing retailers. The trade-exclusive event, which was sponsored by Motion Healthcare and delivered in partnership with the British Healthcare Trades...Liane McIvorLiane McIvorliane@thiis.co.ukAdministratorTHIIS Magazine