Following the launch of its next-gen wheelchair cooling technology in September, Glasgow-based WheelAir has confirmed it has opened up a new office in the Netherlands.

The new wholly-owned Dutch subsidiary will act as a launchpad for the company’s European expansion as it looks to bring the first temperature control system to all wheelchair users across the region.

“With sales increasing in Europe we thought that now is the time to branch out,” said Corien Staels, WheelAir Managing Director.

“We want to really take the time to fully support the business’ growth and to make it a commercial success. And the best way to do this is to open the Dutch subsidiary.”

The new European office marks another significant milestone for the company, which came into existence in 2016 when Corien first came up with her cooling cushion concept during her time at university.

In 2017, the entrepreneur released the first version of the WheelAir system to the market in 2017.

Since then, the company has gone from strength-to-strength, winning multiple awards for innovation and establishing the clinical imperative to address the issue of overheating and over-sweating experienced by wheelchair users.

In July 2018, the company featured in THIIS’ More About… feature, with CEO Corien candidly discussing the positives and challenges of launching a start-up and bringing a new innovation to the mobility market. 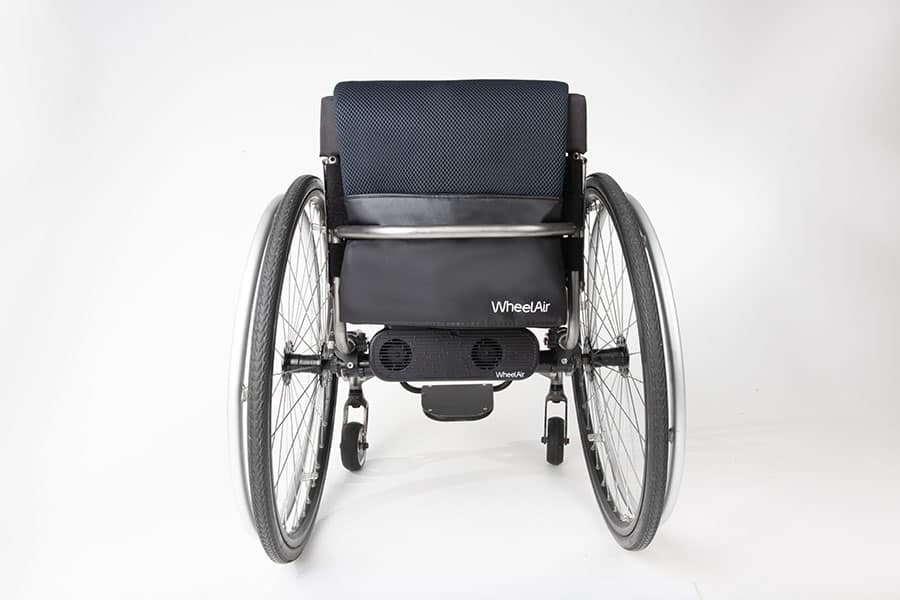 Last year, WheelAir expanded its product range and launched version two of its system, expanding the concept to incorporate more chairs, including being embedded into complex seating systems.

The new office is located in Nieuwerkerk aan den IJssel, near Rotterdam, with WheelAir confirming that it will retain its office in Glasgow and plans to grow the team in both locations.

“We will be maintaining a strong presence in the UK and remain fully focused on serving our existing loyal customers and new ones,” Corien continued.

“It is a move which the board and team are all excited about!”

Since its introduction to the market in 2017, WheelAir systems have been sold internationally, providing life-changing results for people all over the world.

Highlighting meeting WheelAir users face-to-face across the UK and Europe as being one of her favourite parts of her job, Corien added that meeting the needs of customers remains “the number one priority.”

“Expanding to the Netherlands means that not only will we still be spending as much time as possible with customers in the UK, but with the new offices near Rotterdam, we will be able to spend time with our lovely customers around Europe,” she commented.

Albert Nicholl, Chairman of WheelAir, finished: “The expansion of WheelAir to include a new facility in Rotterdam puts the company in a strong position to not only work more closely with suppliers but to more easily deliver the exemplary customer service that people have become used to from us.

“Leading the discussion on microclimate and the issues around overheating and over sweating continues to be at the forefront of everything we do and the new offices and new team members are a demonstration of that commitment to improve the lives of those people who use our products.”

https://thiis.co.uk/exciting-international-expansion-for-wheelair-as-new-dutch-subsidiary-launched/https://thiis.co.uk/wp-content/uploads/2020/02/Corien-WheelAir-expansion.jpghttps://thiis.co.uk/wp-content/uploads/2020/02/Corien-WheelAir-expansion-150x150.jpg2020-02-24T11:43:07+00:00Calvin BarnettNewsroomSupplier NewsTrade NewsCorien Staels,Dutch,Netherlands,Nieuwerkerk aan den IJssel,Rehacare,Rotterdam,subsidiary,wheelAIR,wheelchair cooling systemFollowing the launch of its next-gen wheelchair cooling technology in September, Glasgow-based WheelAir has confirmed it has opened up a new office in the Netherlands. The new wholly-owned Dutch subsidiary will act as a launchpad for the company’s European expansion as it looks to bring the first temperature control system...Calvin BarnettCalvin Barnettcalvin@thiis.co.ukAdministratorTHIIS Magazine