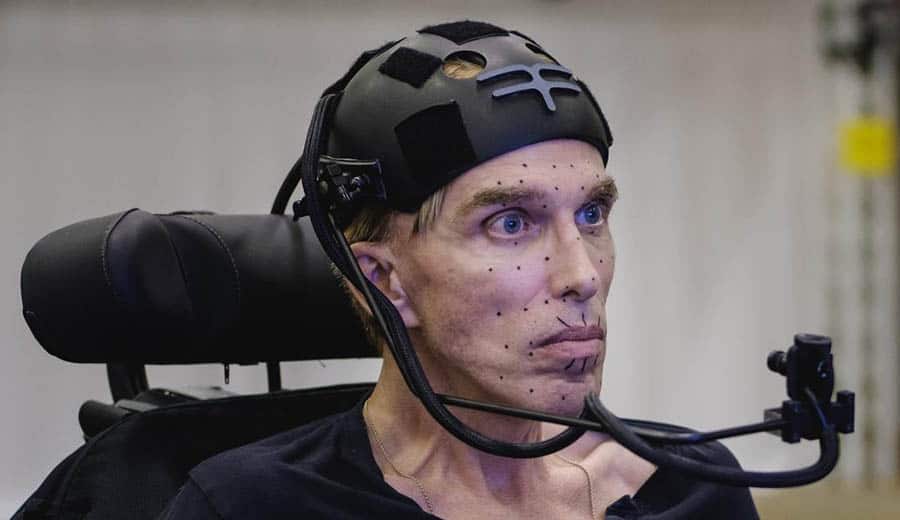 Permobil’s F5 VS has played a key role in scientist and robotics expert Dr Peter Scott-Morgan’s extraordinary journey as he explores and adopts the latest in cutting-edge technology and AI to overcome Motor Neurone Disease.

A pioneer in the field of science and robotics, Dr Peter Scott-Morgan boasts a masters in artificial intelligence (AI) and a PhD in robotics from Imperial College London.

In 2017, Peter learned that he had Motor Neurone Disease – a terminal disease that degenerates nerve cells.

Immediately after his diagnosis, Peter decided to put his fascination with robotics into practice and set off on his incredible journey to become the world’s first ‘human-cyborg’.

Filmed over two years, the documentary followed Peter as he undergoes a radical cybernetic transformation, working with doctors, assistive technologists, engineers, designers and more as he employs surgery, AI and robotics to live his life to the fullest.

Providing the foundation to facilitate Dr Scott-Morgan’s journey was Permobil’s F5 VS, an advanced sit-to-stand powerchair.

The company started working with Peter in 2018 as the robotics expert pushed the Permobil team to take the powerchair to its technological limits with an array of customisations needed to incorporate Dr Scott-Morgan’s range third-party additions.

Discussing working with Peter, Gordon Cunningham, General Manager Permobil UK & Ireland, said: “The starting point for Project Charlie, as we affectionately dubbed the project, was the same as with any chair: understanding that a power chair is not just a mobility device to get from A to B, but that the person in the chair sees it as his or her lifeline to life.

“Our job is to then do all we can to make that possible.”

Permobil and Peter together decided to stagger the customisation of the F5 VS so he could benefit from it as soon as possible. Charlie Mark 1 was built and customised at the powerchair specialist’s workshop in northern Sweden and delivered to Peter in November 2018.

“The ideas, imagination and the level of planning that have gone into his ability to live a fulfilling life have left us all in awe,” said Pete Jones, Permobil Product Rehab Specialist who worked closely with Peter and Project Charlie.

“As can be seen on screen, Peter’s drive and optimism is not to be underestimated or overlooked.”

In addition, the chair boasts upgraded actuators to handle the extra weight added to the chair, as well as brackets on the backrest to hold 2x 360° webcams to give the user complete vision.

The last of the major customisations were completed in late 2019 when the Eyegaze & avatar technology, intuitive co-pilot attendant control, and enhanced pressure relieving seating upgrades, were installed. The company also confirmed fine-tuning some of the existing customisations too.

Discover more about Permobil and its solutions on THIIS Connect