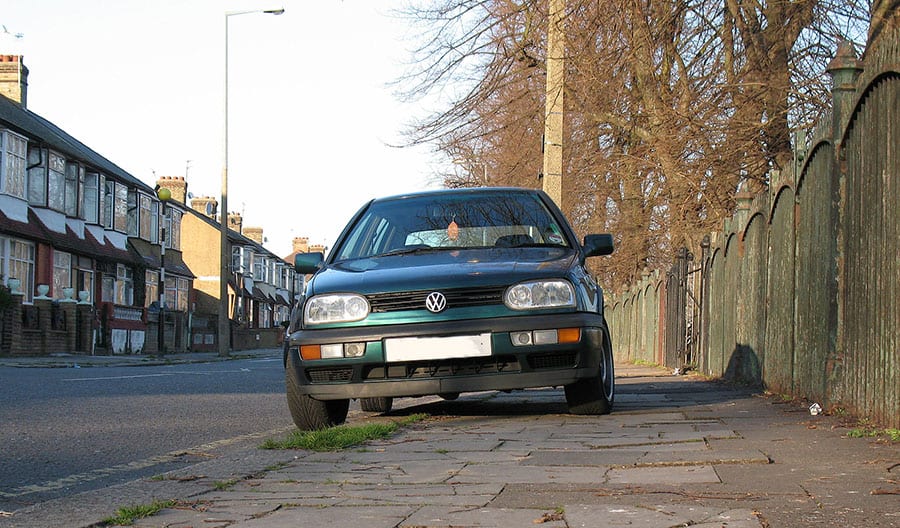 Following 2019’s inquiry into pavement parking in England by the Transport Committee, the Government has confirmed it is to run a consultation about a national ban, potentially following suit with Scotland.

A situation where a vehicle partially or wholly obstructs pavements, pavement parking causes problems for those with mobility impairments who are forced to undertake dangerous manoeuvres to pass the blocking vehicle.

Recently, an elderly mobility scooter suffered injures and wrote off his mobility aid after being forced to ride in the road due to a parked van blocking his path.

In Scotland, the law to ban pavement parking was passed on the 10th October 2019 and will come into effect in 2021 as part of the Transport (Scotland) Bill.

Following Scotland’s decision, campaigning groups such as Living Streets have called for a similar blanket ban to be adopted in England.

Speaking in 2019 following Scotland’s decision to ban pavement parking, Joe Irvin, Chief Executive for Living Streets, said: “Pavement parking is the one issue we are contacted most about at Living Streets, with older adults especially reporting that they’re unable to leave their homes because of vehicles blocking their pavements and leaving no room for mobility aids.

“The Scottish Government has demonstrated a commitment to accessibility for all by passing this law. England and Wales should not delay in following Scotland’s lead.

In England, pavement parking was outlawed in London in 1974, however, the ban does not extend to the whole of the country, where local authorities are required to establish their own prohibited pavement parking zones.

The Transport Committee in September 2019 published a report into pavement parking in England which highlighted the detrimental effects pavement parking can have on people with mobility needs.

In response, the government has now outlined several actions the Department for Transport will undertake, with measures including a consultation about a national ban on pavement parking which will increase the profile of the issue nationally.

Importantly, no date has been specified for when the consultation will report.

In addition, the Department for Transport will consider a possible offence of ‘obstructive pavement parking’ or ‘unnecessary obstruction’ to enhance police powers which could be enforced by police and local council.

Commenting on the government’s intention to address the problem of pavement parking, the Chair of the Transport Committee, Huw Merriman MP, said: “I am pleased the government has taken on board the previous Committee’s concerns about the very real difficulties presented by pavement parking and our proposed solutions.

“There is much to praise in this response and we particularly welcome the Department for Transport’s intention to consult the public on how a ban on pavement parking would work for them. During this inquiry, our predecessor Committee received more than 400 pieces of written evidence, revealing the depth of concern. During a visit to my constituency, MPs were able to see for themselves the challenges presented by pavement parking and hear directly from particular groups in Bexhill-on-Sea.

“However, we have to now deliver this change. The government promised to look into the issue in 2015 but consultations, roundtable events and internal reviews failed to lead to any actions to improve the experience of the public. This government has signalled an intent to finally deliver change. We now need a detailed timeframe from the Department for Transport to ensure this happens.

“In publishing today’s Response, we are putting the Government on notice that we will be monitoring progress carefully. We look forward to reviewing progress on each of the pledges and our Committee has committed to a further evidence session in 12 months’ time to drive real change.”

Last year, a new app called eFine announced it was preparing to launch, enabling all people, including the disabled and elderly, to report pavement parking to their local authority using a smartphone.

Responding to the announcement however, the British Parking Association – representing the UK parking and traffic management profession – raised numerous concerns about the app, stating it could not work under the current regulations governing pavement parking and how penalty charges notices are issued.

In response, the release of the app was been put on hold as the creators lobby for changes to enforcement regulations. With attention turning to the question of a nationwide ban and how such a measure could be enforced however, alternative solutions such as eFine may soon be sought out.