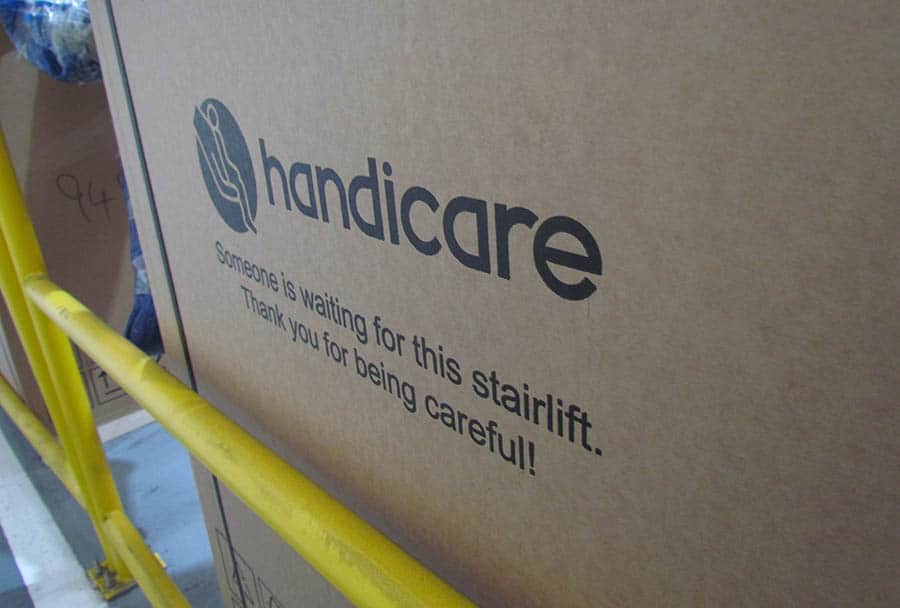 Richard Whitehouse, Operations Director of stairlift manufacturer Handicare, has been named as one of the country’s outstanding professionals in manufacturing in 2019’s Manufacturer Top 100 awards scheme.

Famous for declaring at the Handicare Dealer Day that he is “the one that is never happy,” Richard says his goal is to continuously look for areas where Handicare can improve its operations.

Since joining the stairlift specialist back in July 2016, the motivated Ops Director has been pivotal in continuously improving Handicare’s efficiencies and product quality, significantly reducing the manufacturer’s lead-time. 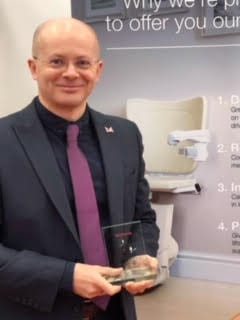 Now capable of turning around a rail from scratch in three days, THIIS met Richard in October 2019 where he gave a tour of Handicare’s Kingswinford manufacturing facilities.

Over the course of the tour, Richard discussed the extensive product testing the company carries out on its products, testing stairlifts for the equivalent of 10 years with up 100kg loads on, as well as the intricate processes involved in turning around bespoke rails for customers.

Passionate about the work Handicare does and the solutions it provides to end-users, Richard pointed out that the company has a culture that is unique to other companies he has worked in, praising the attitude and efforts of his production team.

“I honestly believe it is one of the happiest companies that I have ever worked for. I have worked for quite a few, including big corporations, but here, it really is the case that everyone cares about the customer.

“When I first started, we had an instance where we had to make a lift for somebody because the person was leaving hospital to pass away at home. In order for that to happen, we had to turnaround the stairlift immediately. It was 5 pm on a Friday afternoon when all the team were going home.

“I spoke to them and asked if there was any way we could get this through and they all said OK. Off came the coats and they went straight back to work. That’s what the team is like and it really is a privilege to work with them.”

Richard is also a keen advocate for bringing through the next generation of manufacturing professionals into the sector.

The company offers electrical and mechanical engineering internships to young people, as well as sponsoring some of the interns through university, investing in new talent.

Handicare and Richard are also engaged with local schools, promoting and supporting its STEM (Science, technology, engineering and mathematics) programmes to encourage more young people to pursue a career in the field.

Recognising Richard’s hard work and dedication to the field of manufacturing, he was selected from hundreds of nominations as one of the top 100 UK manufacturing professionals in this year’s The Manufacturer Top 100 project.

Now in its sixth year, the project, run by The Manufacturer magazine in partnership with Cranfield University, distinguishes dynamic leaders and innovators in manufacturing, with its goal is to help dispel popularly-held myths that vibrant manufacturing in the UK is a thing of the past.

Nominated by Clare Brophy, Managing Director of Handicare UK, she commented: “Since joining us, Richard’s focus has been on creating a stairlift manufacturing operation fit for the future. He has also been instrumental in raising our profile with young people, initiating a programme identifying and nurturing talent into the manufacturing marketplace. We are very proud to see him ranked in the Top 100.”

In the report, Richard states: “I am a passionate believer in manufacturing and the need for the UK to strengthen its manufacturing power base once again. I think my achievements come from getting teams and individuals to work together, to challenge them to do things they didn’t believe possible and to enable them to achieve those goals.”

“We need to keep saying that, because as a nation we seem to harbour the notion that no one in the UK makes things anymore, and young people are discouraged from considering careers in manufacturing. The truth is we do make things – we are the world’s ninth-largest manufacturing nation – and careers are very well paid. But there are too few skilled young people coming through the system.”

He added: “We must not let the prejudices of yesterday poison the opportunities of tomorrow.”

Handicare said it would welcome the opportunity to take its trade partners on a tour of its West Midlands facilities to show customers the various production processes involved in creating its popular stairlift ranges.

“It would be great to show more dealers around our operations,” Richard told this.

“The more our dealers know about Handicare, the products and how they are made, the greater appreciation and understanding they’ll have about these solutions they are providing to their customers.”

https://thiis.co.uk/celebrated-handicare-ops-director-encourages-mobility-dealers-to-pay-manufacturer-a-visit/https://thiis.co.uk/wp-content/uploads/2019/11/Handicare-Manufacturer-Stairlift-Box.jpghttps://thiis.co.uk/wp-content/uploads/2019/11/Handicare-Manufacturer-Stairlift-Box-150x150.jpg2019-11-19T12:55:32+00:00Calvin BarnettAwards & AchievementsNewsroomRetailer NewsSupplier NewsTrade NewsCranfield University,efficiency,Handicare,manufacturing,manufacturing professionals,Operations Director,production,Richard Whitehouse,Stairlifts,STEM,The ManufacturerRichard Whitehouse, Operations Director of stairlift manufacturer Handicare, has been named as one of the country’s outstanding professionals in manufacturing in 2019’s Manufacturer Top 100 awards scheme. Famous for declaring at the Handicare Dealer Day that he is “the one that is never happy,” Richard says his goal is to...Calvin BarnettCalvin Barnettcalvin@thiis.co.ukAdministratorTHIIS Magazine