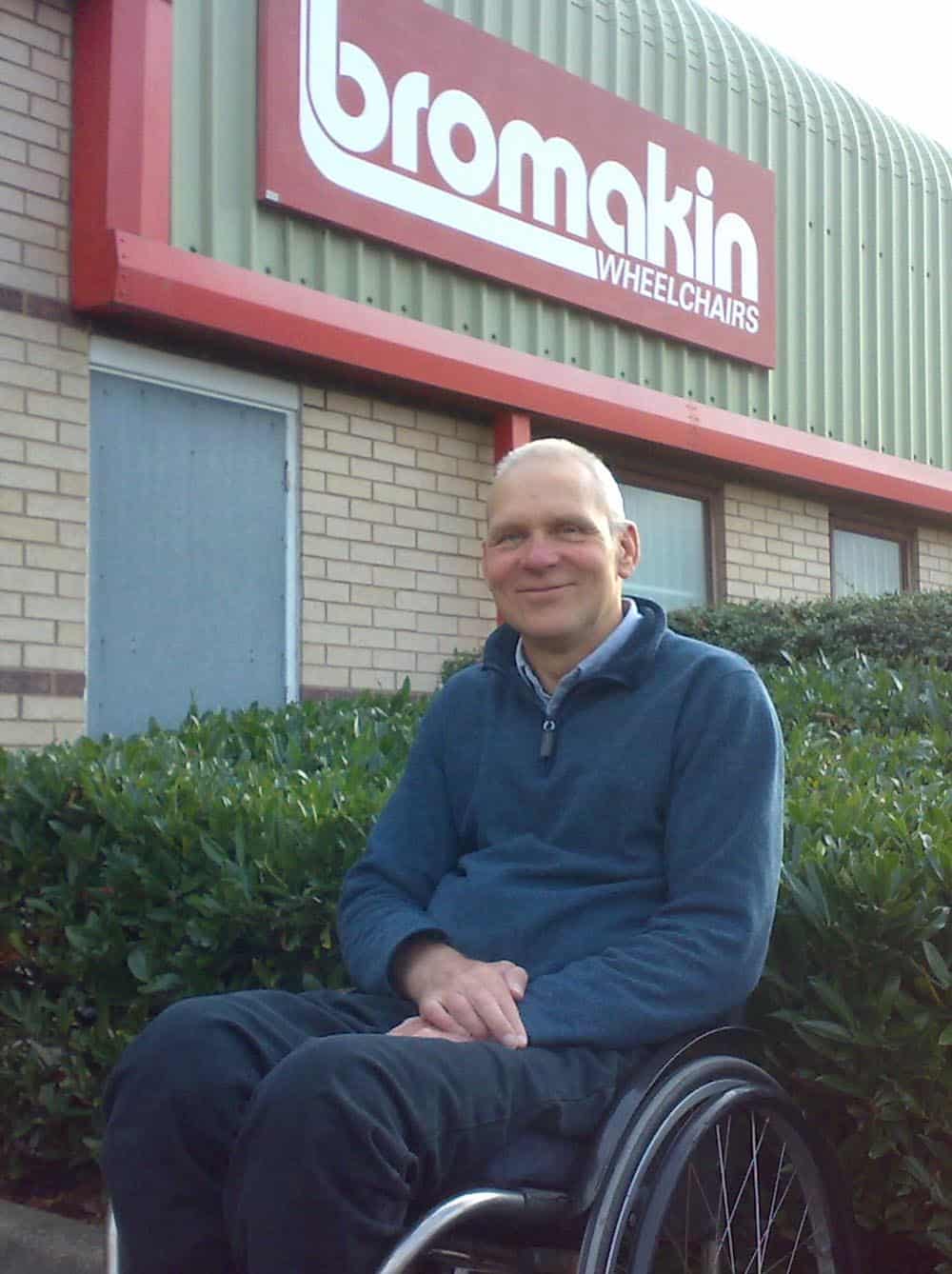 It is with sadness that Bromakin has confirmed the passing of its founder Peter Carruthers MBE, a British gold medallist Paralympic athlete and industry pioneer who forwarded the development of bespoke sports equipment for disabled athletes.

The inspirational industry icon founded Bromakin, a manufacturer of specialist racing wheelchairs and national retailer of a wide range of mobility aids, in 1983 with his wife Sheila following a road traffic accident that resulted in Peter becoming a full-time wheelchair user.

A keen sportsman, Peter was keen to continue his sporting activities after his injury but realised the range of mobility sporting solutions on the market at the time for C7 tetraplegics were limited.

Undeterred, Peter and Sheila adapted his Everest & Jennings-style chair to make it more suited for his sporting needs on his kitchen table and was involved with the very early days of altering a standard wheelchair to turn it into a longer stretched-out chair that would be better to race in.

Paving the way for the design of racing chairs which would later be developed into the typical three-wheel models that are recognisable today, Peter and Sheila continued adapting and manufacturing specialist wheelchairs for sports, with Bromakin growing over the decades to supply almost everything for the aspiring wheelchair sportsperson or everyday user.

Through his and Sheila’s efforts, Peter went on to lead an illustrious racing career, completing over 50 marathons, as well as setting national records in three track events at the at Barcelona 1992 for ParalympicsGB.

Peter’s most outstanding achievement came at the 1988 Seoul Paralympics, where he won gold in the 100m and set a new world record time.

A recognised and respected ambassador of wheelchair racing, Peter became the Chair of the British Wheelchair Racing Association (BWRA), helping it grow into the thriving sport it is today, as well as introducing well-known Paralympians including Tanni Grey-Thompson and David Weir into the sport and to their customised chairs.

A statement from the British Paralympic Association (BPA) said it was saddened to learn of the death of Peter, highlighting his sporting and personal accomplishments.

“Peter was an inspirational character and a legend in the wheelchair racing and rugby communities and is a sad loss to the movement,” commented Nick Webborn, BPA Chair.

“His work in advancing sports chair and wheelchair design is also a huge legacy and helped so many of our community.

“His achievements were extraordinary, his contribution immense, and he will be sorely missed.”

Alongside his racing, Peter was an enthusiastic wheelchair rugby player and in his later life, he played with the East Midlands Marauders, with Loughborough University awarding him an honorary MA in recognition of his achievements. He was also honoured with an MBE for his commitment to pioneering the development of bespoke sports equipment for disabled athletes and championing disabled sports.

Having retired from work a few years previously, Bromakin is now owned and managed by Steve Asher and Rob Wickham, who remained close with Peter and Sheila.

Discussing the passing of Peter, Steve told THIIS: “We at Bromakin are devastated by the passing of Peter as he was a truly inspirational person, but also our friend as well. We will continue to carry on the business in the way it was started but you can see by reading his story that they are very big boots to fill.”

To commemorate Peter’s life and achievements, Bromakin is hosting a celebration afternoon on the 8th August from 1.30pm after a private burial, where those who knew Peter can join to share stories and remember a life lived to the fullest.

The mobility company said it would love as many people as possible to be able to attend if they were an old acquaintance, stating no RSVP is required, encouraging people to wear bright clothing to mark the celebration of his life and requesting that instead of flowers, people make any donations to the RSPB.

The event will be held at: