Having made its seventh appearance at Rehacare this year, Hampshire-based supplier Delichon is no stranger to forming relationships on the continent. Undeterred by the ongoing Brexit negotiations, managing director Martin Davy was keen this year to drive ahead of the company’s European expansion plans.

A specialist in producing custom seating for wheelchair users and well-known in the market for its Foam-Karve system, Delichon began producing its own range of three-wheel, all-terrain buggies in 2007 after spending over a decade supplying and adapting the products.

Manufacturing its Delta range of buggies in the UK, the company turned its attention to export markets in 2014 and has been a regular to the German trade show since, building inroads with European partners and developing the export element of the company.

The fourth time exhibiting at Rehacare independently, rather than as part of the UK pavilion, Delichon continued to see interest from attendees at this year’s event.

“Around 35 percent of Delichon’s turnover now comes from our export activities and so Rehacare is an important place to keep in touch with our existing international dealer network, as well as looking for new partners from countries where we are not currently represented,” Martin told THIIS.

“We always have a lot of interest in our products from the public visitors too and the show this year was no exception, generating a significant number of sales enquiries for our German distributor.”

A family-run operation, this year saw Martin joined on stand with wife and company co-director P-J, eldest son Julian who controls Delichon’s manufacturing activities, and daughter Katriona. According to Martin, it is this family element that helps set Delichon apart in the industry. 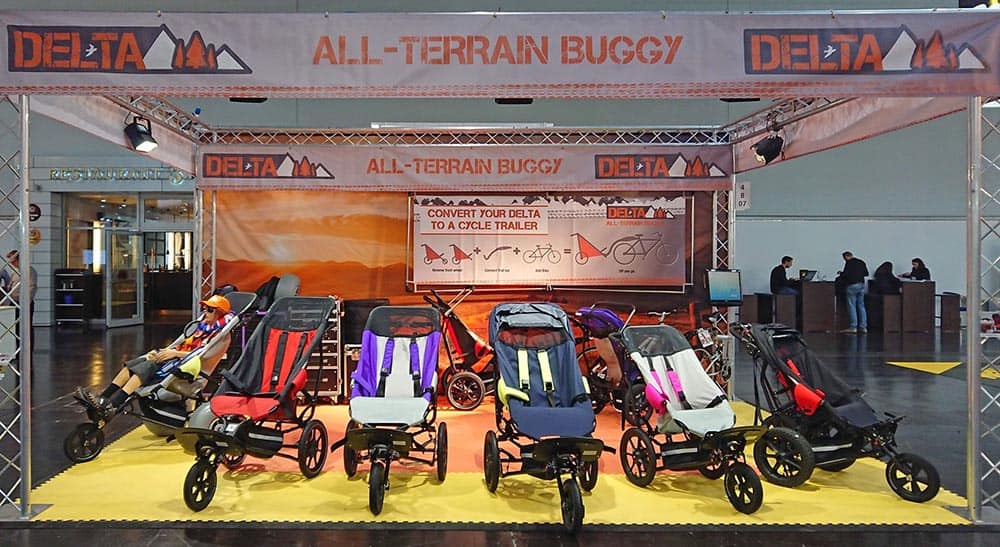 “Delichon always gets a very positive reaction to the fact that we are a family company,” added Martin.

“Apart from some negative reaction to the current Brexit difficulties in the UK, we had another very successful show with some very high-quality enquiries from potential dealers and a couple of opportunities for collaboration on new projects for the future.”

On stand, the company exhibited a range of new products to European trade visitors and end-users, including three new versions – medium, large and extra-large – of its Delta Buggy, created for the Danish market which can be used with Special Tomato’s Sitter Seats.

“We also revealed a custom WheelEez balloon beach wheel conversion for our Delta Buggy developed in conjunction with our Australian and NZ partners, which is now available as an accessory,” said Martin.

In addition, Delichon also showcased a new range of lifting slings from fellow UK company ProMove, which the company is now promoting as an ideal accessory for the buggies and beach wheelchairs that it supplies.

As well as raising awareness of new products, Delichon was also keen to inform trade visitors of its new architect-designed, purpose-built HQ, highlighting the company’s ongoing investment in its facilities as a key marketing message.

“2018 was the first time there since the move to our brand-new premises in February and the fact that we can now showcase our fantastic production and showroom facilities proved to be a great marketing tool,” finished Martin.