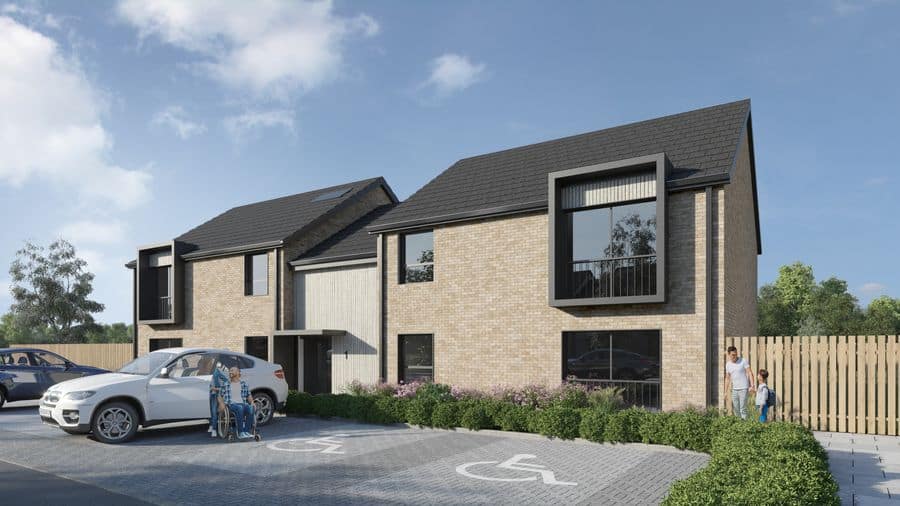 A transformation in housing for people who need assistance to help them live more independently in Dundee is a step closer after independent living specialist, Blackwood, appointed a renowned developer to build 66 homes in Charleston.

As it celebrates its 50th anniversary, Blackwood is now just weeks from starting work on its biggest building project to date in Scotland, in the same city where it created its first ever property.

Fife-based Campion Homes has been appointed as lead contractor on the £17.5m housing project which will deliver a mix of two-bed flats and four and five-bedroom homes, all packed with smart-tech and features to help people to live as independently as possible.

It comes as another Blackwood initiative takes shape in Dundee, as the launch of its Peoplehood project will see £3m invested into Charleston. It is one of three Scottish communities chosen to develop a model for independent living, helping people to live healthier and happier for longer.

Simon Fitzpatrick, Care Development & Commercial Director with Blackwood, said: “Dundee was the location of the very first Blackwood development, so it is fitting that in our 50th year, the city is where we are now building our largest development to date.

“For the people who eventually move into these much-needed homes, it will be totally transformational. For perspective, the number of homes is almost half of Dundee City Council’s total waiting list for adapted accommodation. This is massive for the city.”

Having secured planning permission for the new properties, which will be delivered across seven distinct sites in Charleston, Blackwood went through an exhaustive tendering process to find the ideal delivery partner in Campion, which has its headquarters in Dunfermline.

Simon, who grew up in Dundee added: “Campion Homes has an excellent reputation for building quality homes and delivering value. We are excited to be working with them on such a worthwhile and important milestone for Dundee.”

Alan Chalmers, Commercial Director with Campion Homes, added: “Our team are pleased to be working with Blackwood on the Charleston project in Dundee and look forward to creating a strong partnership in providing these much-needed, affordable homes.”

All of the properties will be based on the award-winning Blackwood House model, which was developed in partnership with architects Lewis and Hickey. The homes come with considered and sensitive design elements, including core living areas which offer barrier free movement.

Each home can also be readily adapted to include a host of other benefits such as lift access, remotely controlled automated functions, and digital care and housing system – all aimed at helping people to live as independently as possible.

The Blackwood House model was first unveiled at the Dundee’s Glamis Road in 2017 when it launched its flagship development of six of the homes. Since then, a further 24 have been created at Helenvale in the east end of Glasgow, earning extensive praise as the benchmark in independent living with Blackwood now stepping up their programme to build a total of 400 new homes over the next 5-7 years.

It sets a new standard for beautiful, accessible, connected and affordable housing that can adapt to tenants’ future needs. It uses Blackwood’s CleverCogs technology which is personalised and links users to care and health services, home automation, local information, entertainment, and video access to family and friends.

Julie McDowell, Board Chair at Blackwood, said: “Working with Campion Homes will further our ambitions to develop a blueprint for independent living and influence how the sector will operate in the future.

“It’s pretty special to be going back to the city Blackwood first started working in to build our largest development to date – especially as we celebrate 50 years of providing innovative services.”

Work is expected to start in June and to last 18 months.  When construction is completed, it is likely that allocation of the properties will be divided between people identified as priorities by Dundee Health and Social Care Partnership, Dundee City Council and Blackwood.

Mr Fitzpatrick praised the vital support Blackwood has received from both Dundee City Council and the Scottish Government to deliver the 66 homes in Charleston and added: “Throughout the entire process both have been very engaged, involved and entirely supportive. We are extremely grateful for that support, which has made this project possible.”

The funding will see the three communities benefit from free tablets and Wi-Fi for participants to help them get digitally connected, while also delivering e-bikes, electric cars and a host of equipment and activities within communities, all according to local demand.

Simon added: “Between the delivery of these 66 new homes and the launch of the Peoplehood project, we are incredibly proud to be investing more than £20m into the Charleston area, not least because the benefits will be felt right across Dundee.”

Blackwood operates more than 1,500 properties across 29 local authorities, and invests in innovation and technology to help people live life to the full.

Earlier this year it was announced that Blackwood, which celebrates its 50th anniversary this year, was providing vital adaptations for around 200 properties across Scotland after it received record funding.

https://thiis.co.uk/blackwood-housing-and-care-partners-with-campion-homes-for-independent-living-milestone/https://thiis.co.uk/wp-content/uploads/2022/05/66-new-homes-in-Dundee.jpghttps://thiis.co.uk/wp-content/uploads/2022/05/66-new-homes-in-Dundee-150x150.jpg2022-05-27T11:53:16+01:00Liane McIvorHousingNewsroomSector NewsBlackwood Homes,Campion Homes,care,elderly,housing,independent,living  A transformation in housing for people who need assistance to help them live more independently in Dundee is a step closer after independent living specialist, Blackwood, appointed a renowned developer to build 66 homes in Charleston. As it celebrates its 50th anniversary, Blackwood is now just weeks from starting...Liane McIvorLiane McIvorliane@thiis.co.ukAdministratorTHIIS Magazine